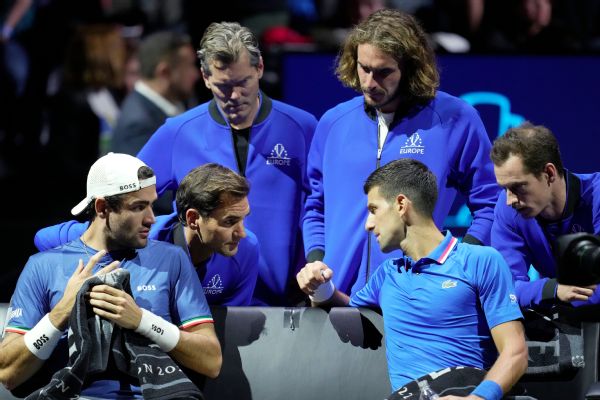 LONDON — Roger Federer’s tearful farewell to his playing career is over. True to his word, the 20-time Grand Slam champion did not say goodbye to tennis.

A day after heading into retirement with a Laver Cup doubles match alongside longtime rival Rafaal Nadal — the pair sat crying, side-by-side, when it ended — Federer was back on the sideline Saturday, offering coaching tips during a victory by his Team Europe fill-in for singles, Matteo Berrettini, and chatting with Novak Djokovic during his first match in months.

« Having the chance to live what we lived yesterday is something that’s going to be stuck in my heart and my brain forever. I’m not lying when I say that I’m here because of him. Like, he was really the one that I was looking up to, » said Berrettini, a 26-year-old from Italy who was the runner-up to Djokovic at Wimbledon last year.

Federer is unsure of his exact plans for the future, but he did vow to remain a part of the sport, saying, « I won’t be a ghost. »

« Roger told me to hit my forehand decisively … with more weight, » Berrettini said. « And to go down the line every so often with my backhand. »

Berrettini’s win in the opening match on Day 2 of the three-day team event founded by Federer’s management company was followed by Team World’s Taylor Fritz beating Cam Norrie 6-1, 4-6, 10-8. Then came a 6-1, 6-3 win for Team Europe’s Djokovic against Frances Tiafoe.

Djokovic used his post-match interview to pay tribute to Federer and called Friday’s last hurrah « one of the most beautiful moments I’ve ever experienced in my life, for sure. »

Djokovic, who hadn’t competed since winning his 21st major trophy at Wimbledon in July, accumulated 19 winners and just six unforced errors in what he described as a « pretty decent match » against Tiafoe.

It gave Team Europe a 6-4 lead; the first squad with 13 points will win.

Djokovic was slated for double duty, partnering with Berrettini against Jack Sock and Alex de Minaur in doubles in Saturday’s final match.

The seats were less packed and the atmosphere was more subdued than the previous evening.

« It was just one of those things: You never really think he’s actually going to retire. So I think kind of the realization hitting everybody, like, ‘This is it’ … was super emotional, » Fritz, a 24-year-old -old Californian, said about Federer, who is 41. « See him crying. Hugged him. I said, ‘Thank you. Thanks, Roger. Thanks for everything.’ That got me going. Yeah, it was pretty tough to not be crying. »

Norrie also got help from Federer, who suggested trying to serve-and-volley on one particular point. Alas, while Norrie said it should have worked, it didn’t, because he flubbed the volley.

« If Roger Federer’s telling you to do something, » Norrie said, « there’s no way I’m not going to do it. »

Djokovic was in Berrettini’s ear earlier.

« Novak gave me very useful advice on the return, » Berrettini explained. « He told me to move back a little, because at that moment, (Auger-Aliassime) was hitting serves that were bouncing high, so I was a little uncomfortable. »

Like Federer, Nadal withdrew from the Laver Cup following their doubles loss to the team of Tiafoe and Sock. Nadal’s wife is supposed to give birth to their first child soon, so Norrie stepped in as a replacement.

Nadal, who holds the men’s record of 22 major titles, has been dealing with injuries all season, including a torn abdominal muscle, but did not want to miss Federer’s final match.

Novak Djokovic to tune up for Australian Open in Adelaide International