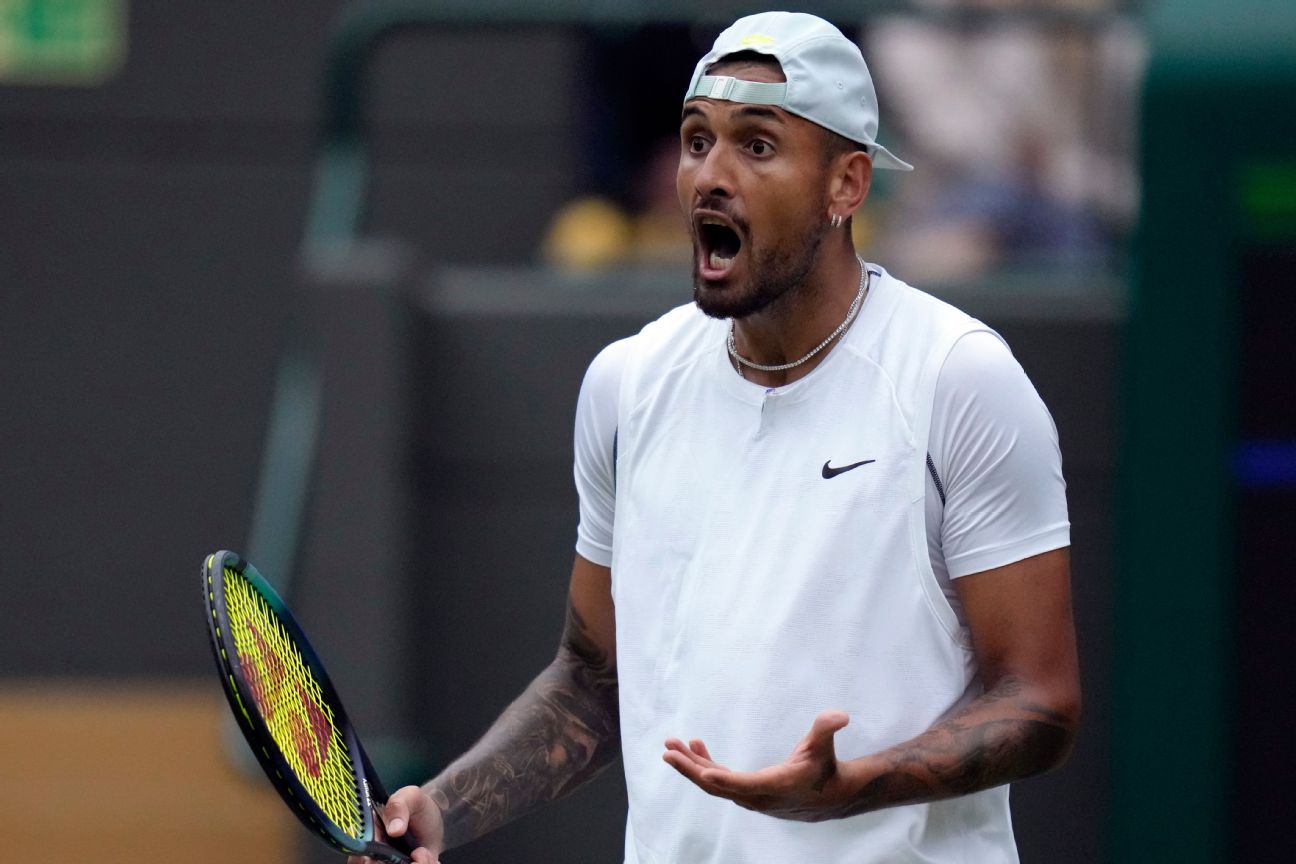 LONDON — Nick Kyrgios felt « disappointment » when he first heard Rafael Nadal had withdrawn from their Wimbledon men’s singles semifinal. Then he said he only managed one hour of sleep on Thursday night and was « a reckless ball of energy » as he processed the news.

Nadal withdrew from their semifinal with an abdominal injury, meaning Kyrgios will contest his first ever Grand Slam final on Sunday against either Novak Djokovic or Cameron Norrie.

Kyrgios on Friday said he was hoping for a « third chapter » after going 1-1 in two previous matches against Nadal at Wimbledon.

« My energy was so focused on playing [Nadal] and tactically how I’m going to go out there and play, the emotions of walking out there, all that type of stuff, » said Kyrgios, who said he learned of Nadal’s decision while he was eating dinner Thursday.

« But, you know, it wouldn’t have been easy for him to do that [withdraw]. … He barely lost a match this year. He wanted to probably go for all four. So it wouldn’t be easy. I hope he gets better. »

Now Kyrgios’ attention has shifted to the men’s final on Sunday, saying he was « super proud » of himself and that he « never thought » he’d make a Grand Slam final.

« I had a shocking sleep last night, though, to be honest, » Kyrgios said. « I probably got an hour’s sleep just with everything, like the excitement. I had so much anxiety. I was already feeling so nervous, and I don’t feel nervous usually.

He added: « I was just restless. So many thoughts in my head about a Wimbledon final. That’s all I was thinking about. I was thinking just [about] playing, obviously imagining myself winning, imagining myself losing. Everything. …I feel like I’m just a reckless ball of energy right now. I just want to go out on the practice court now and hit some tennis balls and just talk. I don’t know. I want it to come already. Yeah, I want the final to come already. »

Kyrgios has twice lost to Djokovic in matches, and they have also previously clashed off the court. However, they have grown closer since Kyrgios supported Djokovic at the start of the year when he was deported from Australia in advance of the Australian Open.

« We definitely have a bit of a bromance now, which is weird, » said Kyrgios, who added that Djokovic sends him direct messages on Instagram. « I think everyone knows there was no love lost for a while there. I think it was healthy for the sport. I think every time we played each other, there was hype around it. It was interesting for the media, the people watching, all that.

« I felt like I was almost the only kind of player and someone to stand up for him with all that kind of drama at Australian Open. I feel like that’s where respect is kind of earned. Not on the tennis court, but I feel like when a real life crisis is happening and someone stands up for you. »

That has been rare in Kyrgios’ instance, especially with his fellow Australians.

Kyrgios said that Lleyton Hewitt, who was the last Australian men’s player to reach a Slam final at the 2005 US Open, is one of the few Australian former pros who show him any support.

« The kind of only great that’s ever been supportive of me the whole time has been Lleyton Hewitt, » said Kyrgios, who said that he hit with Hewitt earlier in the tournament. « Like he knows. He’s our Davis Cup captain, and he kind of knows that I kind of do my own thing. »

It’s been an eventful fortnight for Kyrgios at Wimbledon. He was twice fined — first for spitting in the direction of a spectator after his first-round win, then again for an « audible obscenity » in the third round vs. Stefanos Tsitsipas. He overcame a shoulder injury in the fourth round. Prior to his quarterfinal match, news broke that he was being summoned to a court in Canberra, Australia, next month to face a charge of common assault.

Earlier in the tournament, he was criticized by Pat Cash for bringing « tennis to the lowest level I can see as far as gamesmanship, cheating, manipulation, abuse, aggressive behavior to umpires, to linesmen » during an appearance on BBC radio.

« It’s pretty sad because I don’t get any support from any of the other Australian tennis players, the male side. Not the players, but like the past greats. It’s weird they just have like a sick obsession with tearing me down for some reason. Like, I just don’t know whether they don’t like me or they’re, like, afraid. I don’t know. I don’t know what it is. But it sucks, because if it was roles reversed, if I saw [Alex] De Minaur in a final, or if I saw Jordan Thompson or Thanasi [Kokkinakis], I’d be pumped. I’d be stoked. I’d be having a pint watching going nuts. »

Venus Williams receives wild-card entry from USTA for US Open