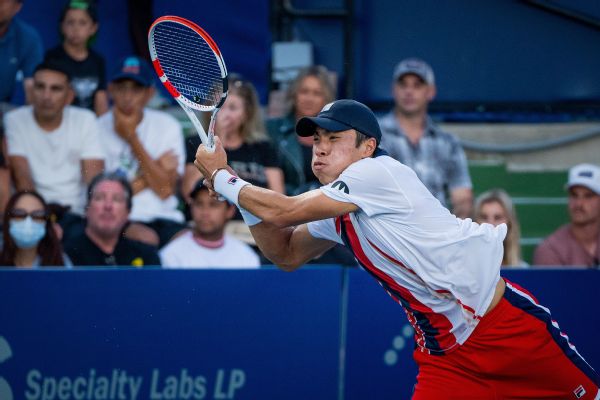 « It’s super special, something you dream of, but to have it happen in my hometown with all my friends and family here, it’s a moment I’ll never forget, » said Nakashima, who had two previous finals appearances. « I hope there are many more moments like this to come. »

Nakashima, a 21-year-old who grew up in San Diego and trained extensively at the event’s site as a junior, clinched the opening set in only 30 minutes. The second set, filled with long rallies, took nearly an hour.

Giron, the No. 5 seed and former NCAA title winner from UCLA, wasn’t able to fend off Nakashima’s persistent ground strokes and well-placed serves. Nakashima had eight aces, six in the first set.

Serving at 5-4 in the second set, Nakashima tallied the match’s deciding two points when Giron pushed an easy volley into the net, followed by Nakashima’s second-serve ace.

He earned $93,090, about half of what he received for reaching the third round of the US Open in early September.

Nakashima, who was ranked No. 69 on the ATP Tour, moved up to 48, his highest ranking in nearly three years on tour. Despite the loss, Giron moved up to 53 from 58.

Not only was the singles title claimed by an American, the doubles title also taken by an American duo as the second-seeded pair of Nathaniel Lammons and Jackson Withrow defeated Australians Jason Kubler and Luke Saville 7-6 (5), 6-2.

Novak Djokovic to tune up for Australian Open in Adelaide International