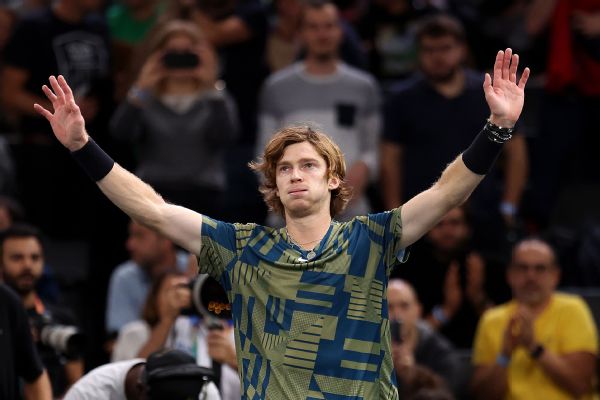 PARIS — Andrey Rublev improved his chances of qualifying for the ATP Finals by cruising past John Isner 6-2, 6-3 in the second round of the Paris Masters on Tuesday.

The seventh-seeded Rublev beat Isner for the first time in four meetings. Isner dropped serve twice in the opening set, and Rublev capitalized on three forehand errors by the American to break for a 3-1 lead in the second.

« From the baseline I was feeling really confident, » Rublev said. « As soon as I was returning or the ball was in the game, I feel like I have always advantage, I was not even nervous. »

Isner slammed 11 aces, but Rublev did not face any break points and proved the better player in rallies, making only five unforced errors to 13.

Rublev, Felix Auger-Aliassime, Taylor Fritz, and Hubert Hurkacz are contending for the two remaining ATP Finals spots. The Russian virtually occupies the last spot ahead of Fritz and Hurkacz.