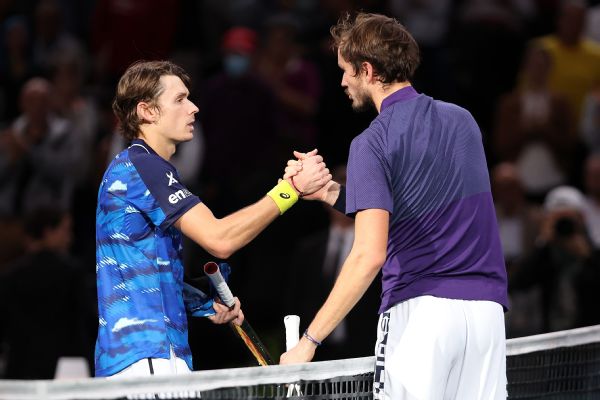 PARIS — Alex de Minaur upset fourth-seeded Daniil Medvedev 6-4, 2-6, 7-5 in the second round of the Paris Masters on Wednesday.

After rallying from a 2-0 deficit in the final set, De Minaur failed to convert his first two match points at 5-4. He hit a return out on the first match point and made an unforced error on the second.

But the Australian got two more chances at 6-5. Medvedev saved the third match point with a service winner before double-faulting on the fourth and angrily throwing his racket to the ground.

Medvedev, who won the Paris Masters in 2020 and was runner-up last year, dropped serve in the first set by overhitting a smash in the final game. But the Russian capitalized on unforced errors by De Minaur to break twice in the second set.

Tsitsipas raced to a 3-0 lead in the first set. He then hit a forehand winner across court to break Evans in the opening game of the second, before converting his first match point with an ace.

« I’m happy with the level of tennis I brought when I had to, » Tsitsipas said. « I was moving well, I was dictating well. I combined everything, including my defense, the transition to offense. I was serving well, I was very calm in important moments, and it paid off. »