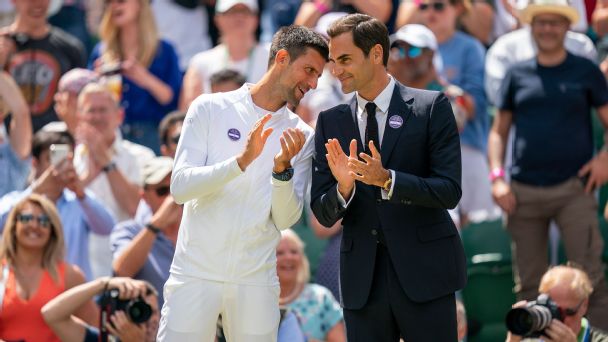 LONDON — We’re in the twilight of the GOAT era. Rafa Nadal’s body is creaking, Roger Federer hasn’t played a competitive match in a year and Serena Williams’ next movements are unclear. Novak Djokovic is at the peak of his powers but will likely not play another Grand Slam event until May.

Tennis will likely never see them like again, and the chances to watch them are getting rarer.

Friday’s Wimbledon men’s semifinal round was going to be a blockbuster. Opening with Djokovic against British hope Cam Norrie, then Nadal, now 36 years old, trying to take down mercurial Nick Kyrgios to continue his charge for a calendar Slam. But a tear in a muscle in Nadal’s abdomen robbed us of the second half of that draw.

And with that came the growing feeling of transience in the sport, and that gnawing thought at the back of the mind knowing these players will one day retire was moving closer to the front of the mind.

Kyrgios refers to Nadal, Federer and Djokovic as the « gods. »

He was asked on Friday about whether the players outside of the Big Three will be able to shoulder the responsibility of taking this sport forward when they are no longer playing.

« We’ll never see a competitor like Rafa again, » Kyrgios said. « You’ll never see someone wield a racket like Roger, so effortlessly. You’ll never probably see anyone who just wins and just plays the game just so good as a winner than Djokovic. »

He namechecked the next gen coming through in Brandon Nakashima, Jannik Sinner and Carlos Alcaraz but reiterated four times in his answer, « I don’t think anyone will fill those shoes » of the famous trio.

Federer, who is 40, has been missed at Wimbledon this year. Early last week when the attendance figures were down on previous years, one theory from inside the walls of the AELTC was the lack of the Federer factor. His supporters gravitate to wherever he’s playing, and while you still see the RF caps and apparel dotted around Wimbledon, he has been missed by fans and players alike.

« My personal relationship with Roger [has] always [been] great, and probably my greatest rival, » Nadal said. « At the same time, all the things that we shared together on court is something difficult to describe, the emotions, all the things. »

« And of course I personally miss him in the tennis tour, and tennis of course miss him, tournaments, fans, everyone, » Nadal continued.

It was Federer’s surprise appearance for the 150th Center Court celebration that drew one of the biggest cheers of the fortnight. Federer was unsure whether to accept the invitation — although he didn’t explicitly explain why, one can imagine the contrasting emotions and feelings of being out there in a suit and having not played in the tournament alongside Djokovic and Nadal — both in their tennis gear. It could have been a goodbye, but instead he told the adoring crowd he wanted one more shot at Wimbledon.

Nadal is also revered in these corridors — as a competitor but also as a person. After announcing his withdrawal from the semifinal against Kyrgios, he collected his things and headed back to the players’ reception area. He went around and thanked every member of the staff, giving those he knew well a hug. That’s not for show; it’s just Rafa.

Serena even named her dog after him. « I’m always rooting for Rafa, » she said. « He’s been really inspiring in everything that he’s done this year. »

Djokovic, the youngest of the legends at 35, is a more polarizing figure here. But the crowd still shows appreciation whenever he plays, given he is a six-time champion and speaks so fondly of the competition. But the chances to watch him at Slams are diminished — at present he won’t be able to play at the US Open as he’s unvaccinated and won’t be allowed in the country. He was deported from Australia at the start of the year and will need to overturn a three-year banning order to be able to play at the Australian Open in 2023.

« Federer, Nadal, Djokovic, these guys are, like, so rare, » Kyrgios said.

And then, of course, Serena. The younger sister of Venus Williams is 40 years old, and she played two doubles matches — her first tennis since tearing her hamstring at Wimbledon last year — and then lost in the opening round of the women’s singles to Harmony Tan.

Afterwards she wouldn’t make any guarantees on when she’d next play. Like the three above, she transcends the sport — her status as a 23-time Grand Slam winner is unmatched, but there’s also an acceptance that she won’t be around forever, one day leaving an astonishing legacy.

When Nadal was asked about his thoughts of Serena’s dog being named after him, he answered: « It’s great to hear these beautiful things from probably one of the biggest female athletes in the history of the sport in general. After all the things that she achieved , and long period of time being injured, is so difficult to try to come back. [to] be here shows that she has a lot of love for her work and for this game. «

The weather was perfect on Friday, the start of a heat wave in the UK The hill behind Court 1 was packed as usual, watching home hope Norrie play Djokovic on Center Court. Despite being one first match down on the main court, the stands were still packed. The sounds, sights and smells were the same as ever.

But there was something missing with Nadal absent. There’s more of an urgency to see the legends of the sport whenever possible. Their retirement has been spoken of for so long, but the reality has never really hit. Eventually the sun will set on their careers, with no tomorrow. But there always is, it’ll just be different.

« That’s the circle of life, you know, » Nadal said earlier in the tournament. « Time happens, and the clock never stops. This kind of stuff we need to get used to. »