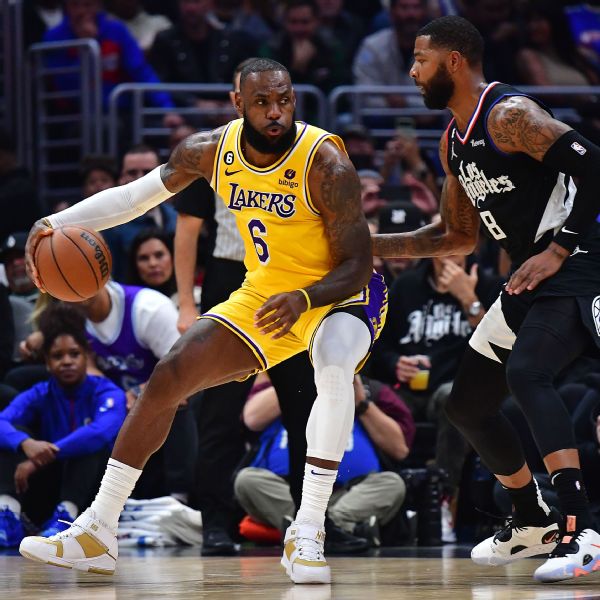 LOS ANGELES — Lakers star LeBron James left Wednesday’s 114-101 loss to the LA Clippers midway through the fourth quarter with he said was a groin injury and did not return.

James limped off the court with 5 minutes, 41 seconds remaining in the fourth quarter and was grabbing his groin area. The team said he was dealing with left leg soreness.

Team doctors will evaluate James on Thursday and administer medical imaging to determine the extent of the injury.

« I didn’t do anything extraneous on the play, » James said of the sequence when he appeared to tweak something while posting up the Clippers’ Paul George. « Just when I landed, I felt a little spasm or strain in my groin. So immediately I had to come out after that on the next play down when I went to the free throw line. »

James, 37, suffered a tear in his left groin during the 2018-19 season — his first in LA — that caused him to miss 17 straight games from late December to late January.

« It’s not as bad, » James said, comparing his current discomfort with what he went through four years ago.

James did not rule out playing in LA’s next game on Friday against the Sacramento Kings.

The injury marred a strong performance from James, who had 30 points on 12-for-22 shooting, eight rebounds, five assists and two steals in 32 minutes.

Lakers coach Darvin Ham said his message to James after the game was to « do what you need to do, just take care of your body. » But losing James — the team’s leader in minutes, points and assists — for any amount of time would be a major challenge for a team that’s 2-9 after its fourth loss in a row.

« I mean it’s just a lot of adversity, » Ham said. « [James] has been trying his heart out just to be there for us and play at a high level. I thought he had it going really, really well tonight. But it just is something that it’s the NBA season, man. You got to be ready for a little bit of everything. We’ll see once he gets evaluated, and we’ll be ready to move forward. »

Ham said he didn’t want anyone on the Lakers to feel the need to be a « hero » if James misses any game action, but Anthony Davis said he will feel compelled to take on more.

« For me, the mindset switches to just going out, being aggressive and trying to find ways to help the team win — whether it’s more shots or know it’s my job to make these guys better, » said Davis, who had 21 points and nine rebounds against the Clippers. « It’s my job anyway. But it’s heightened when someone like LeBron is out with everything he can do on the floor. »

James appeared relatively calm about the injury, saying, « I stay even-keel no matter what’s going on, » but there was line of questioning that irked him during his postgame news conference: free throws.

He was 2-for-4 from the line Wednesday, marking the fifth time this season where he attempted four free throws or fewer.

« I also would like for the whistle to be blown when I get hit, » James said. « I looked at a lot of guys tonight shoot a lot of jump shots and they’re going nine, 13 times to the free throw line.

« I got to learn how to flop or something. Seriously. I need to learn how to do that. Swipe my head back or do something to get to the free throw line because the ‘I missed it’ [he hears as an explanation from the referees] is getting too repetitive. It’s three games straight of ‘I missed it.' »