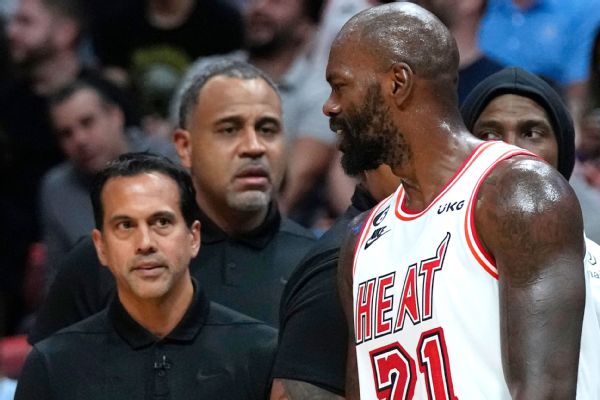 MIAMI — Reserve center Dewayne Dedmon has been suspended without pay by the Miami Heat for one game for conduct detrimental to the club.

The move came one night after Dedmon had an outburst after being subbed out of a game against the Oklahoma City Thunder. He exchanged words with coaches on the sideline, then angrily swatted at a massage gun and felt it flying onto the court during play.

That got him ejected from the game, further depleting an already short-handed Miami roster, and the Heat used only seven players over the final 33 minutes of what became a 112-111 victory.

Heat coach Erik Spoelstra, speaking after that game, said Dedmon’s actions as he left the floor were « unacceptable. » Dedmon will miss Miami’s home game Thursday against the Milwaukee Bucks.

The Heat said they issued the suspension « in consultation with the NBA. » The league office reviewed Dedmon’s ejection and the actions that caused it, as is customary when any player is ejected.

The suspension will cost Dedmon about $32,414. He is making $4.7 million this season and has a nonguaranteed contract for next season.

Miami expects to have starting center Bam Adebayo back for its game Thursday against Milwaukee. Adebayo was one of seven players, including four would-be starters, who missed Tuesday’s game with injuries.

Dedmon has appeared in 29 games this season for Miami, all off the bench, averaging 5.9 points and 3.7 rebounds. He would be eligible to return Saturday, when the Heat play host to the Bucks for a second consecutive game.