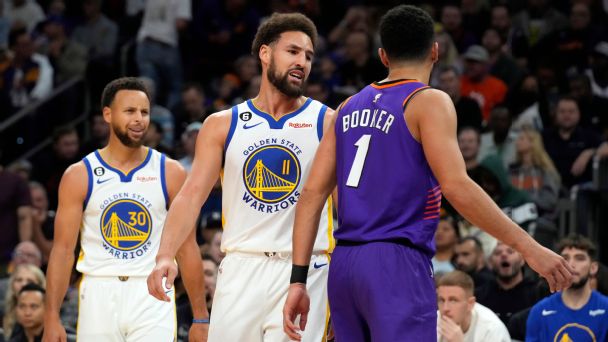 Devin Booker has to hand it to the Warriors and more from our NBA quotes of the week.

« They have four rings, repeated over and over, and they do, and they did. »

Phoenix Suns guard Devin Booker, on what Golden State Warriors guard Klay Thompson said to him before Thompson’s ejection in their game this week

« I know y’all think it’s funny when he talks about Popeyes and all that s—. That doesn’t make me happy to hear. »

« I only asked him, I said, ‘Have you ever been in this situation before?’

Portland Trail Blazers guard Damian Lillard, on what he said to Phoenix Suns center Deandre Ayton before Ayton attempted two potential tying free throws with the Suns down 113-111. Ayton missed his first shot, then missed the second on purpose, but the Suns couldn’t convert.

« It was like just a scene out of a movie. I’ll never forget that night. I have pictures on my phone from that night that I’ll probably frame up in my house at some point in time and tell my kids, ‘ This is one of the biggest moments in sports and in the history of the country.' »

Cleveland Cavaliers guard Donovan Mitchell, on the night the NBA shut down because of the COVID-19 pandemic, via « The Old Man and the Three » podcast

« I just think like, if we’re going to come in and be honest as a team, I’m not trying to just be critical over what Ben’s done right or done wrong every single night. He’s a basketball player, he’s a professional , he has the skills to be a great professional, he’s done it in the past. And he hasn’t played in two years. So you guys keep coming in here asking me, ‘What about Ben?’ ‘What about Ben?’ and it’s just he hasn’t played in two years. Give him a f—ing chance. »

Brooklyn Nets guard Kyrie Irving, defending teammate Ben Simmons from criticism. Irving was caught on a courtside microphone yelling at Simmons to shoot the ball after Simmons passed up a potential shot near the net.