Celtics win wild one in OT after blowing 20-pt. lead to Lakers 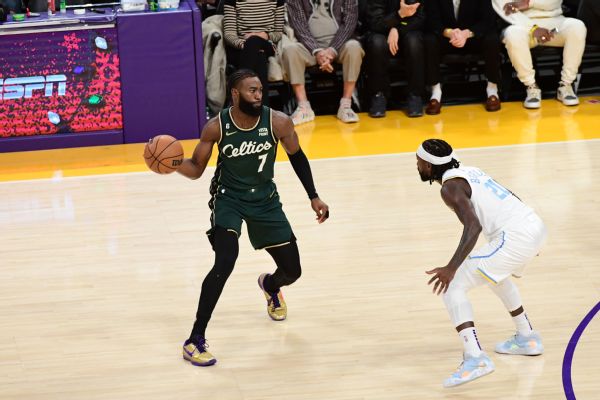 LOS ANGELES — Another dramatic chapter was written in the long, storied history of the Los Angeles Lakers and Boston Celtics’ rivalry on Tuesday night.

Boston, led by Jayson Tatum’s 44 points, outscored LA 12-8 in the extra period to pull out the victory.

The Lakers trailed the Celtics by as many as 20 points in the third quarter but used an 18-0 run through the end of the third to the beginning of the fourth to take control, going ahead by as many as 13 with 4:25 remaining in regulation.

LA seemingly had a chance to ice it with Anthony Davis at the line with 28 seconds left and up by two points, but Davis — who was 11-for-13 on free throws on the night at the time — missed them both.

The misses set up a game-tying pull-up jumper by Tatum with 17.1 seconds remaining. LA then worked the clock down to get LeBron James a potential winner at the buzzer, but his 3-point attempt didn’t go down.

Much like in the Lakers’ loss at the Philadelphia 76ers last week, when LA surmounted a furious comeback to force overtime only to fall apart in the extra session, the Celtics broke the game open to close things out.

Russell Westbrook (20 points, 14 rebounds, 5 assists, 4 blocks) scored the first four points in overtime to give LA a 114-110 lead, but the Lakers couldn’t sustain the momentum.

Davis finished with 37 points and 12 rebounds, and James had 33 points, 9 rebounds and 9 assists.

The Celtics came into the night with an NBA-best 21-7 record but had dropped two games in a row, at the Golden State Warriors and at the LA Clippers.

« That’s a prideful group over there, » Lakers coach Darvin Ham said of Boston before the game. « I wholeheartedly believe that they’re not pleased at all. Not just with the Clippers loss but with the loss before that against the Warriors. We know we’re going to have our hands full. »