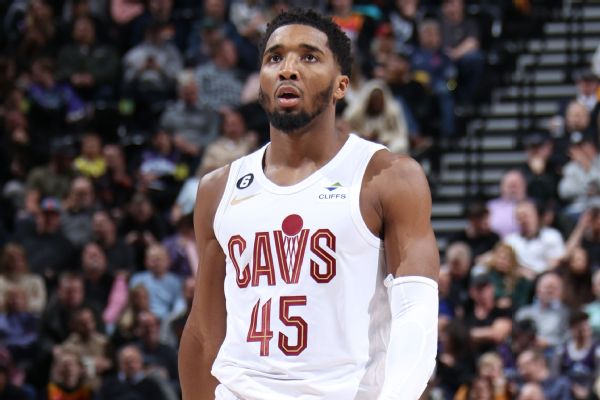 SALT LAKE CITY — Donovan Mitchell had 46 points in his return to Utah, but the Jazz rallied late behind Jordan Clarkson to beat the Cleveland Cavaliers 116-114 on Tuesday night.

Clarkson scored 32 points, including five 3-pointers, and poured in nine straight down the stretch to fuel a decisive 13-0 run.

Lauri Markkanen had 25 points and 16 rebounds against his former team for the Jazz. Malik Beasley, Mike Conley and Nickeil Alexander-Walker added 13 apiece as Utah won for just the second time in nine games.

Mitchell, who spent his first five seasons with the Jazz, also had six assists, five rebounds and three steals. The three-time All-Star was traded to Cleveland in September for a blockbuster package that included Markkanen.

According to Elias Sports Bureau, Mitchell is the seventh player in NBA history with 40 or more points in his first road game against a former team. Of those seven players, he is just the second to lose; the other was Nick Van Exel in his first game back in Los Angeles against the Lakers.

Mitchell set a Cleveland record with 71 points on Jan. 2, most by an NBA player in 17 years, as the Cavaliers rallied to beat Chicago in overtime.

Darius Garland added 21 points and six assists for Cleveland in this one. Evan Mobley and Caris LeVert chipped in 12 points apiece.

Cavaliers center Jarrett Allen played only seven minutes — all in the first quarter — before exiting with an illness.

Cleveland fell behind by 13 in the second half but chipped away at the deficit, finally erasing it midway through the fourth quarter. Mitchell scored three straight baskets to punctuate an 11-0 run and give Cleveland a 101-94 lead. Utah missed 13 of its first 14 shots in the fourth quarter, opening the door for the Cavaliers to go back in front.

But the Jazz surged ahead 115-107 with 23.1 seconds left after Clarkson scored nine consecutive points over three possessions.

Mitchell kept the Cavaliers’ offense afloat in the first half while his teammates struggled to find their shot. He scored or assisted on 10 of Cleveland’s 19 baskets before halftime.

When Mitchell cooled off in the third quarter, Utah scored on seven straight possessions to race out to a double-digit lead. Clarkson made three baskets in a row and assisted on another to power a 13-2 spurt that put the Jazz up 78-65.