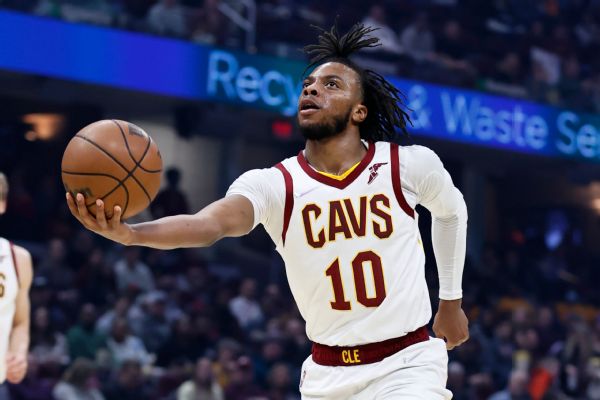 Garland, 22, has been sidelined for five games since he was accidentally poked in the eye by Toronto’s Gary Trent Jr. in the Oct. 19 season opener. Garland suffered a cut to his eyelid and has been dealing with excessive swelling.

Garland took part in the Cavs’ workout on Tuesday and stayed on the floor afterward for extra drills with Cleveland’s assistant coaches.

The Cavs have gone 5-0 without Garland, who has been on Cleveland’s bench wearing dark sunglasses during his on-court absence.

Garland is listed as questionable for the Celtics game, and coach JB Bickerstaff said his availability remains in doubt.

« We’ll see tomorrow, » he said. « He went through everything. It’s how he’s feeling tomorrow and what the swelling looks like. But he was good today. He’s done enough to go ahead and play if he’s gonna play. »

Garland has been itching for the chance to rejoin his teammates, but the Cavs have been extra cautious given the sensitive nature of the injured area.

Garland has tried wearing protective goggles, but didn’t have them on during the post-practice session.

Bickerstaff has appreciated Garland’s spirit while pulling for his teammates. And although he hasn’t been playing, Garland has been engaged during games, which should help his transition back.

« He’s watching with an eye on what’s happening and why it’s happening, » Bickerstaff said. « so when he does come back he understands and he’s participating even though he’s not out on the floor. »

Garland’s injury has prevented the Cavs from being at full strength and him from further meshing with newly acquired All-Star Donovan Mitchell, who has been brilliant in his first six games with Cleveland, averaging 32.2 points, 7.3 assists and 39 minutes while playing the point .