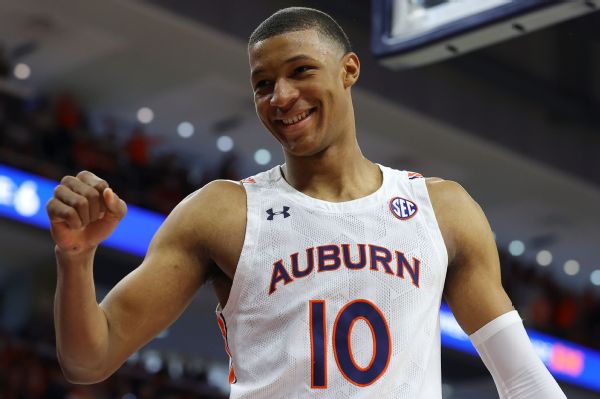 Jabari Smith Jr. is the consensus favorite to be the No. 1 pick, but odds at sportsbooks have been moving on what bookmakers say has become the most heavily bet NBA draft ever.

Smith, a versatile, 6-foot-10 forward out of Auburn, remains the odds-on favorite to be the No. 1 pick in Thursday’s draft (7:30 p.m. ET, ESPN/ABC). Since Monday, his odds have improved from -145 to -280 at Caesars Sportsbook. Smith’s odds also have been improving at DraftKings, where he was sitting at -275 on Wednesday. The Orlando Magic owns the first pick, barring a trade.

Duke’s Paolo Banchero has the second-best odds of going No. 1 and also has seen increased betting interest this week. Banchero, who was 10-1 on Sunday, is listed at +280 on Wednesday at Caesars Sportsbook, ahead of Gonzaga’s Chet Holmgren (+500), whose odds have been fading. Holmgren’s odds were as short as +145 earlier this week. Smith, Banchero and Holmgren are the only players with single-digit odds to be the No. 1 pick.

The varying prices and odds movement have attracted heavy betting interest, especially from professional bettors. At Caesars Sportsbook, the odds to the No. 1 pick in the NBA draft have attracted five times as much money has was bet on the odds to be the No. 1 pick in the NFL draft, according to Eric Fenstermaker, senior trading manager for Caesars Sportsbook.

« It’s the weirdest draft market I think I’ve ever booked, » Fenstermaker, a veteran Nevada bookmaker, told ESPN on Wednesday. « Usually, at this point, there’s clear-cut news on who’s going to be No. 1. But now we’ve got three guys who have each steamed [attracted money from professional bettors] at different times to be the first pick. »

Fenstermaker said a group of sharp bettors « who always beat us on the draft » targeted Holmgren last week, causing his odds to improve significantly. At one point, Holmgren was a co-favorite with Smith to be the No. 1 pick at Caesars Sportsbook. But the action has shifted toward Banchero this week.

Since Sunday afternoon, there had been more bets on Banchero to be the top pick than there had been on any other NBA market offered at Caesars Sportsbook. Online sportsbook PointsBet also reported a surge of betting interest on Banchero to go No. 1. In the past week, Banchero’s odds have moved from 16-1 to 5-2 at PointsBet.

« This is the nature of draft betting, where market movements are as wild as the rumors that drive them, » said Jay Croucher, head of trading for PointsBet. « We saw similar crazy fluctuations with the No. 1 pick market in the NFL draft. Someone out there clearly thinks Banchero has a better chance than public perception to go first, but Smith remains the surest bet. »