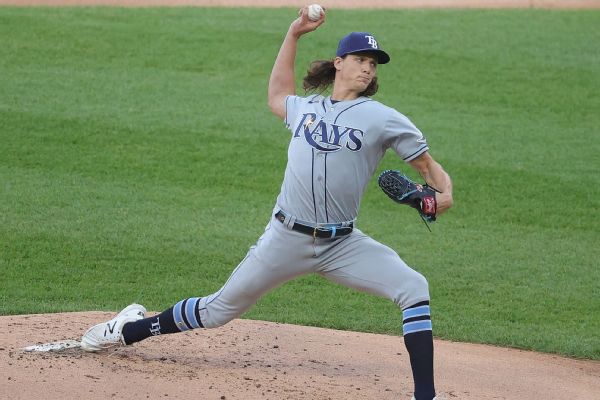 Glasnow threw 21 pitches to a pair of minor leaguers before the Rays played the Los Angeles Angels. Glasnow had Tommy John surgery on Aug. 4, 2021. The 6-foot-8 right-hander made his last appearance on June 14, 2021, at the Chicago White Sox.

« I think it’s like easy to be very optimistic, » Glasnow said. « I felt really good, my velo was good, execution was good, but again, if I’m not comfortable and I don’t feel like 100 percent and ready to go, then I’m not. I’m not going to push it. »

The regular season ends on Oct. 5.

« It’s going to be the hardest thing for me to come to the decision, » Glasnow added. « I really do want to come back. I want to help the team, especially the position we’re in, but I’m not going to jeopardize the rest of my career. »

Glasnow, the 2021 Opening Day starter, went 5-2 with a 2.66 ERA in 14 starts last year. He will have one or two more BP outings before the team will decide whether it is time for a minor league rehab assignment.

« He certainly looked healthy, » Rays manager Kevin Cash said. « I, myself, as much as anybody, probably have to temper the expectations and the excitement around it but I’m glad he’s throwing BPs. »

Rays shortstop Wander Franco hit in an indoor cage and took grounders. Franco was removed from his rehab assignment with Triple-A Durham on Sunday due to ongoing hand soreness.

Franco, 21, went on the injured list July 10 with a right hamate bone injury that required surgery. He played part of just one game a week ago with Durham.

Franco took on-field batting practice on Sunday for the first time since surgery on Aug. 14. After the session, he said he felt great except when taking right-handed swings.

Third last year in the AL Rookie of the Year voting, Franco signed a $182 million, 11-year contract in November that includes a club option for 2033. The deal could be worth up to $223 million with incentives if the club option is exercised.

As part of a series of roster moves, RHP Kevin Herget was designated for assignment. Herget spent a decade in the minors before being selected from Triple-A Durham on Friday but didn’t get a chance to make his major league debut.