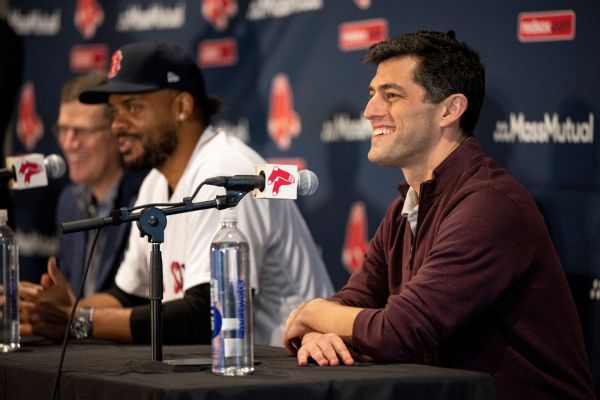 BOSTON — The news conference with new Red Sox closer Kenley Jansen was just about finished when, off to the side, 4-year-old Kyrian Jansen spoke up: « I have a question. »

He was handed a microphone.

Jansen’s son is one of the few Red Sox fans excited about the team this winter following a last-place finish in 2022 and then the departure of shortstop Xander Bogaerts as a free agent last week. The elder Jansen, a three-time All-Star, is Boston’s biggest acquisition so far this offseason.

« It’s all about winning here, » said Jansen, who led the NL with 41 saves for Atlanta last year after spending his first 12 seasons with the Dodgers. « It’s a beautiful place to pitch. The atmosphere, you see how intense the fans are, how much they get it, how hard they root for their team. »

But Jansen arrives in Boston at a time of near-revolt among the fandom, which watched Bogaerts depart just three years after former AL MVP Mookie Betts was traded away in the interest of financial flexibility.

« Fully expected it. Fully expected it, » he said on a frigid Tuesday in a function room overlooking the field, which was laid out for Saturday’s Fenway Bowl football game. « That has not been a surprise. Honestly, I would have been surprised if that had not been the case. »

Bloom stressed that there are different ways to build a ballclub, and with Bogaerts gone the team has necessarily turned its attention to its other weaknesses. The bullpen gave up the most earned runs in the AL last season, and manager Alex Cora struggled to find a dependent closer.

Jansen could be the solution.

The 35-year-old right-hander from Curacao — just a short hop from Bogaerts’ native Aruba — went 5-2 with a 3.38 ERA in 64 innings while helping the Braves with the NL East. In his career, he has a 2.46 career ERA with 391 career saves, second-most among active players behind Craig Kimbrel’s 394, and eighth all time.

The Red Sox have also signed right-hander Chris Martin and lefty Joely Rodriguez, who could take some of the pressure off holdovers like Matt Barnes and John Schreiber.

« [Jansen] has done his job for about as long as anybody has done in the biggest stages, » Bloom said. « And that’s something that I think will help everybody throughout our staff. »

Although the Red Sox still need a shortstop — or a second baseman, if Trevor Story moves over to the right side of the infield — Bloom said hearing Jansen talk shows that other people around baseball are more optimistic about the team’s chances than the Boston fans.

The Red Sox do have a pretty good response to their restless fans: Despite their five fifth-place finishes in the past 11 years, they also won two World Series in that span and four since 2004, more than any other team in baseball.

« I would put our organization and our track record up against anybody else’s in Major League Baseball, period, » Red Sox president Sam Kennedy said. « We’re going to continue to field a team, a complete roster that is going to be competitive in the American League East. That’s our job. We have to do that. And I know our fans will support us if we do that. «