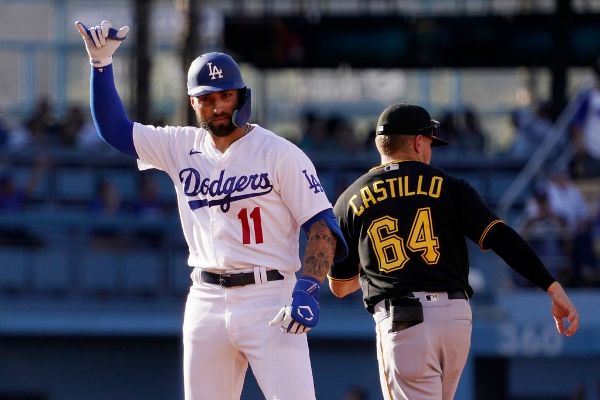 ATLANTA — The Atlanta Braves have added another potential contender for playing time in left field by signing Kevin Pillar to a minor-league contract.

Pillar confirmed the deal Friday, tweeting that he was « beyond excited » to be joining the Braves. He would reportedly make $3 million if he cracks the big league roster.

« Can’t wait to join such a historic franchise and help these guys get back on top! » Pillar said.

The 34-year-old outfielder played in just four big league games for the Dodgers last season before fracturing his shoulder. During his time at Triple-A Oklahoma City, he batted .315 with 10 homers and 40 RBIs.

Pillar played for the New York Mets in 2021, when he was involved in a frightening incident against the Braves. A fastball from Jacob Webb struck Pillar in the face, leaving him with multiple fractures. He still played in 124 games, batting .231 with 15 homers and 47 RBsI.

The Braves outfield is set in two spots. NL rookie of the year Michael Harris II holds down center field, while Ronald Acuña Jr. is the starter in right.

But there’s an opening in left field, where both Marcell Ozuna and Eddie Rosario are coming off disappointing seasons. Pillar joins a group of newcomers brought in to compete for a possible stating job or at least significant playing time.

The Braves acquired Sam Hilliard from Colorado in a trade, purchased Eli White from Texas and signed Jordan Luplow as a free agent.

Now, Pillar is part of the crowded field.