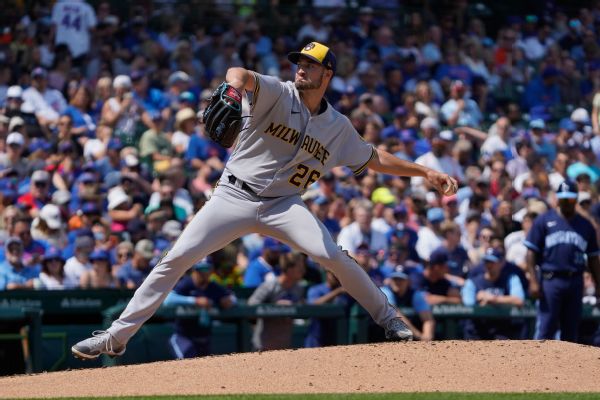 Manager Craig Counsell said Ashby played catch Sunday and « didn’t feel good. » The left-hander went back to Milwaukee to see a doctor but did not have an MRI.

« It’s minor but it’s everywhere he was having discomfort throwing, » Counsell said. « Now it’s the normal process of we got to get him symptom-free. »

Ashby had been set to start Wednesday’s series finale against the Dodgers.

Ashby has struggled with consistency and command during his first full season in the majors, which included an IL stint in June with forearm inflammation.

Nothing he’s going through has been unusual for a young pitcher still adjusting to his role as a starter, Counsell said.

« You got to learn from all of it. We’ve gone through a couple minor things and it’s not alarming in any way, » the manager said. « We just got to continue to get stronger and that’s how you kind of get through this and build your endurance up. »

Last month, the 24-year-old left-hander signed a $20.5 million, five-year contract that starts in 2023. It would be worth $41.5 million over seven seasons if a pair of club options are exercised.

Ashby, who made his major league debut in June last year, has a $704,500 salary this season.