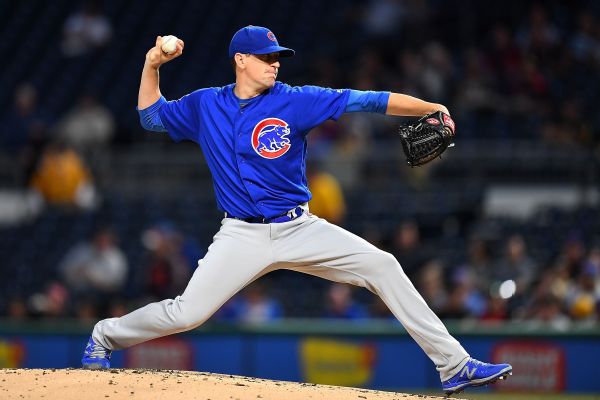 MILWAUKEE — Chicago Cubs right-hander Kyle Hendricks left Tuesday’s game with the Milwaukee Brewers after only three innings due to a sore throwing shoulder.

It was the shortest of Hendricks’ 16 starts this season.

« We’ll let the doctors take a look and see how he presents tomorrow, » Cubs manager David Ross said after their 8-3 victory.

Hendricks said he felt fine before the game but could tell as soon as he threw his first warm-up pitch that something was off.

« No point in pushing it, » Hendricks said. « It’s not something that’s so bad that it’s going to get out of control, but it’s just not great. Something I’ve definitely got to get checked out to see what it’s all about. »

The Cubs’ pitching staff already is at far less than full strength with Marcus Stroman, Drew Smyly, Wade Miley and Alec Mills on the injured list.

Hendricks allowed a two-run homer to Rowdy Tellez in the first inning but didn’t give up any more runs, though his velocity was slightly lower than usual. He threw 69 pitches, struck out four, and gave up two hits and two walks.

The 32-year-old Hendricks is 4-6 with a 4.80 ERA this season. He had allowed a total of two runs in 13⅓ innings in his two starts preceding Tuesday’s game.