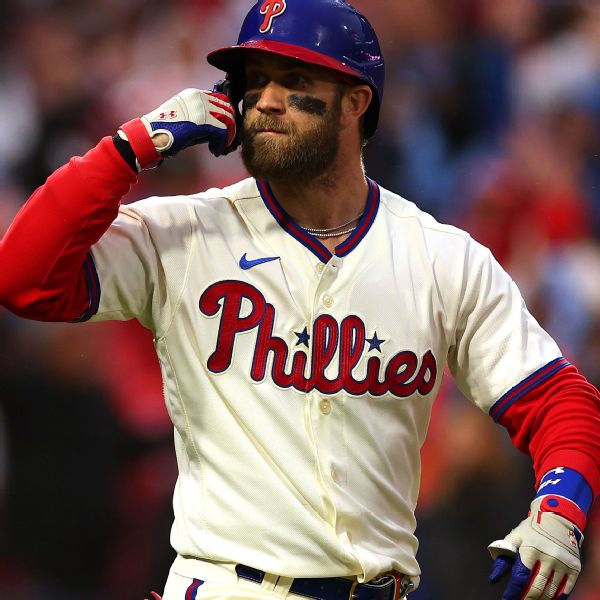 The superstar slugger the Philadelphia Phillies brought in three years ago to turn around a franchise stuck in mediocrity delivered one of the biggest home runs in franchise history to send the Phillies to their first World Series since 2009.

Harper’s two-run rocket shot of a home run to left field in the bottom of the eighth inning gave the Phillies a 4-3 victory over the San Diego Padres, ensuring the face of the franchise will be heading to his first Fall Classic. At times, he carried his team on his back, putting together a dominant playoff run, and his long ball ensured it’s not over.

Harper is hitting .419 with five home runs and six doubles and 11 RBIs in 11 games — but his clinching home run on Sunday is the hit everyone will remember.

Baseball loves its records and unique accomplishments, and here’s a new one: The Phillies are the first 6-seed to reach a World Series.

The Phillies made the expanded playoffs as the final team in the National League to end what had been the second-longest playoff drought in the majors, and their star-laden roster thundered to life at the right time on a windy, sometimes misty afternoon at Citizens Bank Park.

« I believe our team is built for October, I really do, » Harper said after Game 4. « I think we have three starters that are really, really good, and I think we have a great bullpen. Eighth and nineth inning, those two guys [Jose Alvarado and Seranthony Dominguez] down there can go two innings-plus for us. Just our lineup 1 through 9. I think our young guys have been really good for us this year. They stepped up, and our veterans as well. »

In October, however, the Phillies’ stars have been leading the way — just as owner John Middleton had hoped back in the winter of 2018-19, when he infamously said he was going to spend money in free agency « and maybe even be a little bit stupid about it. » That winter, the club signed Harper.

The two-time MVP had delivered a clutch performance even before his Game 5 heroics. Pitcher Zack Wheeler, signed as a free agent before the 2020 season, was one of the Game 5 stars with another outstanding start, allowing two runs over six-plus innings after winning the series opener with seven scoreless frames. Left fielder Kyle Schwarber, signed before the 2022 season to bring a power bat to the lineup and some World Series-winning experience from his days with the Cubs to the clubhouse, also had a big NLCS, with three home runs and six runs scored.

Homegrown first baseman Rhys Hoskins once again delivered a clutch home run that energized the home crowd, just as he had with his two home runs in Game 4. After Schwarber drew a two-out walk off Yu Darvish in the bottom of the second, Hoskins got ahead with a 3-0 count.

Hoskins hadn’t homered all season on a 3-0 count — he had swung just nine times in 31 such situations — but he unloaded on a Darvish cutter and crushed it 424 feet into the left-center seats for his fifth home run of the postseason.

Hoskins came up to the majors in 2017, a season the Phillies lost 96 games. During his six seasons with the Phillies, he’s heard plenty about the 2008 World Series champions. He sees the photos on the walls lining the concourses at Citizens Bank Park, has seen the former stars throw out countless first pitches. Now he knows what 2008 was like.

« It feels like we’re living it, yeah, » he said after Game 4. « The red towels, it’s deafening loud, right? Like, yeah, just the whole scene. And as soon as you step on the field, really , in batting practice, you can just kind of feel the electricity building. I need some more. I need some more of it. »

Indeed, the Phillies improved to 5-0 at home in the postseason and 27-9 since late July.

The Phillies are the sixth team since divisional play started in 1969 to reach the World Series after a midseason managerial change, the first since the 2003 Marlins. The Phillies were just 22-29 on June 2 when bench coach Rob Thomson replaced Joe Girardi.

« I think we can make the playoffs, » president of baseball operations Dave Dombrowski said at the time. « I think we’re in a position where we can battle back to do that. I do believe that. »

A former minor league player and coach, Thomson had been a longtime coach under Joe Torre and then Girardi with the Yankees before the Phillies hired him in 2018. The Phillies had lost 12 of 17 when the proverbial baseball lifer was promoted and immediately turned things around , winning his first eight games and going 18-8 the rest of June.

« I think our manager has a really good ability to keep things going, to keep things going the right way, » Harper said after Game 4. « Never panics, never really sits there and thinks, oh, I need to move this guy or I need to move this guy. I feel like he believes in his players. I think when you have a manager like that that believes in you and has an organization that believes in you, it just makes you that much better of a player. »

The Phillies’ run to the World Series began with a dramatic opening win over the St. Louis Cardinals in the wild-card series. Trailing 2-0 in the top of the ninth, the Phillies scored six runs to take an eventual 6-3 victory.

« That game set the tone, » outfielder Nick Castellanos said after Game 4. « A reminder that a game is 27 outs and how our lineup can score runs in bunches when we get going. »

They eliminated the Cardinals the next day and upset the 101-win Braves in four games in the division series, as Harper went 8-for-16 with two home runs and five RBIs. They crushed the Braves 9-1 and 8-3 at home in the final two games of that series.

Against the Padres, Wheeler dominated in a 2-0 victory in Game 1, but the Phillies blew an early 4-0 lead in Game 2 — only to return the favor when they fell behind 4-0 in the first inning of Game 4 before rallying to win 10-6 behind a four-homer outburst.

Then came the rally to clinch Game 5.

« A resilient group, no doubt, » Hoskins said after Game 4. « But I think to do it on the stage we’re in right now should give us all the confidence in the world that no matter the lead, no matter when it is in the game, we feel like we have a chance. As an offense, that’s an outstanding thing to have. »