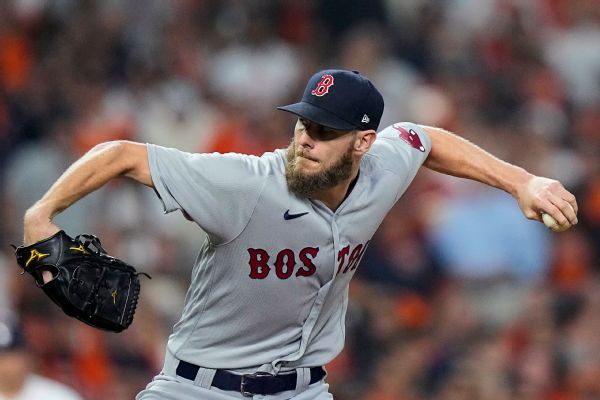 WORCESTER, Mass. — Chris Sale struck out five Triple-A batters before leaving when he walked in a run with two outs in the fourth inning on Wednesday night in what could be his final rehab start before he returns to the Boston rotation.

Pitching for the Worcester Red Sox against the Scranton/Wilkes-Barre Railriders, a Yankees farm team, Sale allowed one run on three hits and five walks. He loaded the bases in the fourth on three hits — two of them infield singles — and then struck out designated hitter Armando Alvarez for the second out with a 96 mph fastball that was his 65th pitch of the game.

That was supposed to be the limit for the 33-year-old left-hander, who broke a rib while working out on his own during the major league lockout. But when pitching coach Paul Abbott came out to talk to Sale, he left alone.

No. 9 hitter David Freitas worked the count to 3-2 and then took a pitch that was close enough for the sold-out crowd to cheer in anticipation of a strikeout. But plate umpire Sam Burch remained silent, the runner trotted in from third to tie the game 1-1, and Sale punched the air in frustration.

Manager Chad Tracy headed to the mound, and Sale departed to a standing ovation. As he walked off, he waved his glove at Burch in a friendly manner.