Baseball is back! What we’re most excited to see this MLB season

Remember the MLB lockout? Neither do we.

OK, OK, we remember it. But with baseball back — and a full 162-game schedule ahead — we’re doubling down on optimism after a dark winter.

So what are we most excited to see this season? ESPN baseball experts Bradford Doolittle, Doug Glanville, Alden Gonzalez, Tim Keown, Tim Kurkjian, Joon Lee, Matt Marrone, Dan Mullen, Buster Olney, Marly Rivera and David Schoenfield share their picks for what has them pumped for 2022.

I’m excited about 21,650 innings. That’s a symbolic number more than a precise one but it’s roughly what you get when 30 teams play 162 games apiece under a set of rules not guided by pandemic concerns. For two years, we’ve all craved a sense of normalcy and for those of us who love baseball, even when at times it tries so hard to be unlovable, nothing promotes that day-by-day sense of rightness like the daily companionship of our greatest game. And real games, no snipped doubleheaders, no weird extra-inning gimmicks. Just baseball for six months, 2,430 games and (approximately) 21,650 innings. For weeks it’s seemed impossible that we’d get it but here we are, the full menu. Thanks goodness.

Doug Glanville: A diamond anniversary … celebrated on the diamond

I am most excited about the chance to celebrate the 75th anniversary of Jackie Robinson’s Dodgers debut. Especially after we all were facing the game spiraling into a deeper labor dispute. His memory gives us a chance to reflect on the game’s meaning with an appreciation for what some players had to endure just to create opportunity for others. After experiencing a pandemic and recognizing so many efforts to be a more inclusive society, Robinson’s legacy reminds us not to take our gifts for granted. The game needs that reminder right now.

From when the games will begin to which big names are headed to new places, we’ve got you covered.

When MLB games will start and more »
Predictions for remaining free agents »
Olney: Expect a hurricane of activity”
Biggest moves of the offseason so far »

The best team money can buy? In the New York sports world, those words are usually reserved for one team: the Yankees. That adage may no longer be true. In penning Max Scherzer, Starling Marte, Mark Canha and Eduardo Escobar, the Mets have directly addressed their offensive woes while flirting with becoming the first team to eclipse the $300 million payroll mark. And billionaire owner Steve Cohen’s checkbook remains open as he continues to delight Mets fans with a foreign concept to them: a « win-now » attitude. The Mets just added another arm — All-Star starter Chris Bassitt — to the best one-two punch in the game (presuming a healthy Jacob deGrom). They still need Francisco Lindor to return to his All-Star form, but while their electrifying offseason may have been eclipsed by the lockout, GM Billy Eppler has rounded up a team taxed with contender expectations. Under new manager Buck Showalter, Mets fans may start to believe that this year will be different. We have heard that before. But this time it might actually be true.

White Sox manager Tony La Russa called Buck Showalter this offseason with a message: We need you back in the game. Showalter, 65, took the job as the manager of the Mets after three years out of uniform. It will be fascinating how he brings that immense talent together. He is the most observing manager in baseball, he never misses a thing and he is curious about everything in and around the game. He once asked me, « Have you ever seen a great player who has a lot of freckles? » When Showalter managed the Orioles, I asked first baseman Chris Davis if Showalter walks through the dugout during games asking players, « Did you see that? Did you see how the third baseman moved to his right just before the pitch? » Davis said, « Yes, he asks things like that all the time. Finally, I told him, ‘Buck, I didn’t see it. No one saw it. You are the only one who can see those things.' » Mets fans and Mets players will enjoy what Buck sees.

David Schoenfield: Seattle in September — and maybe in October?

You may have heard the Seattle Mariners have the longest playoff drought of any team — not just in MLB, but in the NBA, NFL or NHL. They’ve come close a few times since last making the playoffs in 2001, including 2021 when they won 90 games and entered the final day of the season still in the mix. They signed Cy Young winner Robbie Ray, they acquired Jesse Winker and Eugenio Suarez to hopefully help boost the lineup. They have exciting young talent — Jarred Kelenic and Logan Gilbert debuted last season, and Julio Rodriguez, the franchise’s best prospect since Felix Hernandez, could crack the Opening Day roster. There is legitimate reason to believe. Nothing beats the tension and intensity of playoff baseball and the next best thing to playoff baseball is playing meaningful games in September. The Mariners finally experienced that last year and that felt only like the beginning of a bright future.

It’s easy to forget, after months of labor tension that placed constant focus on the coldness of sports economics, that Shohei Ohtani once reminded us to wonder. It was just last year that Ohtani navigated through a baseball season in historic fashion, excelling as a pitcher and a hitter in ways that drew comparisons to Babe Ruth. And yet, one can’t help but think his best awaits. Ohtani is only 27. The 2021 season was his first as a two-way player in the United States and his first as a full-time pitcher in half a decade. His .965 OPS at the plate and his 3.18 ERA on the mound won him a unanimous AL MVP Award, and yet, wild as it might sound, his ceiling might be higher. The game needs Ohtani more than ever. His prodigious home runs and his devastating splitters trigger the type of joy we’re all clamoring for. And more is coming.

The Braves may have been one of the most underrated champions in baseball history, with the perception of them shaped by their 88-win regular season rather than their steamroller finish. Through the end of the regular season, they had 44 wins among their last 68 games (that’s a 104-win pace), all without Ronald Acuña Jr. Riding that great young core of talent, they’ll try to overcome the $300 million Mets and become the first team in more than two decades to go back-to-back — without Freddie Freeman. Fascinating challenges ahead.

Joon Lee: The beasts of the AL East 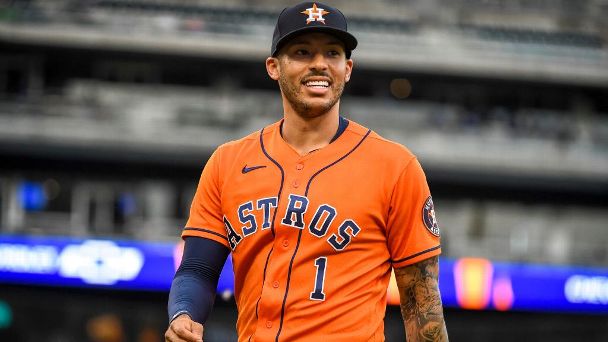 The hot stove has been relit! We break down the biggest moves of the spring scramble — and what could come next.
Predictions for top free agents (ESPN+) »

The AL East projects to be one of the most dynamic divisions in the sport. I’m excited to see how the Blue Jays look a year after nearly making a run to the playoffs and how young stars like Vladimir Guerrero Jr. and Bo Bichette perform. The Red Sox took a surprising step forward last year. The Yankees figure to be under the microscope again after a disappointing finish in 2021, after entering the season as World Series favorites. The Rays can truly never be counted out, either, regardless of the star power on their roster, but their ceiling could be even higher this year with a full season of Wander Franco.

I know some fans will take a little while to warm up to this one, but I cannot wait for what the expanded playoffs are going to bring to baseball this year: More fans with reason to be interested in their team later in the season. The more teams we have in pennant races, the more fans we have caring about baseball deep into September — and the more fans who care about baseball deep into September, the better it is for baseball. And once we get to October? Well, let’s just say I’ve never spent the month wishing there was less playoff baseball to enjoy.

Tim Keown: The sounds of summer

I’m a simple man. Give me the soundtrack of the game, the nightly background music of summer. Give me my local guys, Mike Krukow and Duane Kuiper, and give me a game that takes forever and gets more convoluted by the inning. Give me Krukow describing a big ugly swing as a « yee-haw daddy. » Give me the first out of the game followed by Kuiper saying, « And that’s how this game gets started. » Doesn’t matter who’s playing, or where, or what time of day. These aren’t just the sounds of a baseball season, though they are that, but ways of noting the passage of time. They ‘ve been part of life for long enough now that I’ve learned to never take them for granted.

Matt Marrone: The boys of summer

In 2020, I sent my then-5-year-old son, Jacob, to Citi Field for the season as a cardboard cutout. We did manage to get to an actual game last year, but not as many as I would have liked. This winter, during the height of the lockout, Jacob asked me, « Are we going to more baseball games this year? » Meanwhile, my 3-year-old son, Peter, has been making Lego versions of Yankee Stadium and parading them around the house. More than anything, I’m thrilled baseball is back because of them — so their dad can take them out to the ballgame again.