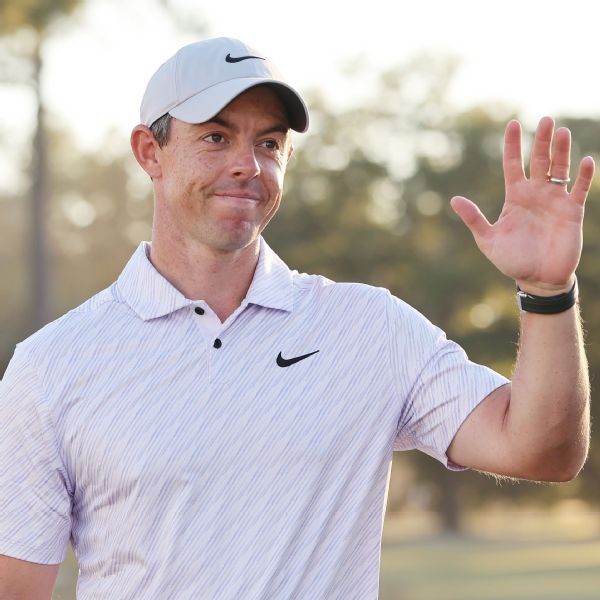 RIDGELAND, SC — The final steps on Rory McIlroy’s long road back to No. 1 go down on the scorecard as bogeys, which made him laugh. All that mattered Sunday was winning the CJ Cup in South Carolina, and that about made him cry.

McIlroy reclaimed the No. 1 ranking for the ninth time by holding off Kurt Kitayama and enduring a nervous moment at the end with a three-putt bogey that gave him a 4-under 67 and a 1-shot victory.

More than the ranking, it was realizing how far he had come with so much support behind the scenes that made his voice slightly choke with emotion.

« This tournament last year was the start of me trying to build myself back up to this point, » McIlroy said. « I had a really rough Ryder Cup. I think I was outside the top 10 in the world — it’s not a position that I’m used to being in. »

McIlroy went 1-3 in a Ryder Cup loss. He was outside the top 10 for 15 consecutive weeks, the longest stretch of his career since first getting to No. 1 a decade ago. For a player of his caliber, that made him feel further behind than he really was.

« I think just the steady climb back up to the summit of world golf and what it takes, » he said. « And it’s not just me, it’s everyone that’s a part of my team. I just think about everyone that’s made a difference in my life, not over the last 12 months, but ever. »

Inside the ropes, it was vintage McIlroy.

Tied with Kitayama with five holes to go at Congaree, McIlroy ran off three straight birdies to sixteen control. The pivotal run began with a 5-iron from 227 yards to 15 feet on the par-3 14th, only the fifth birdie on the hole in the final round.

« I think the birdie on 14 was really…that’s what separated…the birdie on 14 was big, » McIlroy said. That was followed by another key moment on the 348-yard 15th hole, where he got up-and-down for birdie and Kitayama three-putted for par from 40 feet.

McIlroy followed with a 20-foot birdie putt on the 16th.

It was his ninth time reaching No. 1 in the world, behind only Tiger Woods and Greg Norman (both 11) in getting to the top of the ranking the most times.

He won the CJ Cup for the second straight time. The South Korea-based tournament was held in Las Vegas last year, when McIlroy was No. 14 in the world.

So began his climb back to No. 1, with victories in the Canadian Open and the Tour Championship to capture the FedEx Cup, and with help from Scottie Scheffler cooling from his torrid stretch through the Masters.

« I’ve worked so hard over the last 12 months to get back to this place, » McIlroy said. « I feel like I’m enjoying the game as much as I ever have. I played with that joy and it’s definitely showed over these last few months.

McIlroy was No. 1 when golf shut down for three months at the onset of the COVID-19 pandemic, and he lost the ranking to Jon Rahm when the Spaniard won the Memorial in mid-July 2020.

Scheffler finished in the middle of the pack at Congaree, meaning McIlroy could have been runner-up and still reclaimed the No. 1 ranking. He wanted the trophy, and it was harder work than he imagined.

McIlroy was staked to a 1-shot lead going into the final round and never trailed, though he didn’t have it easy until he walked toward the 18th green, and even that made him sweat. He had a 2-shot lead and gunned his 40-foot putt some 8 feet by, while Kitayama had a 20-footer for birdie. They both missed.

Rahm, coming off a win at the Spanish Open, tied McIlroy on three occasions early while playing in the group in front of him. Rahm was still in the mix until his tee shot on the long par-3 14th caught a plugged lie in the face of the bunker, leading to bogey.

He wound up with 69 to tie for fourth.

The real threat was Kitayama, three times a winner while playing in Asia and Europe. The 29-year-old Californian overcame an early 2-shot deficit and was tied for the lead until McIlroy took over with big putts and he couldn’t answer.

Kitayama played bogey-free and closed with a 67 for his third runner-up since joining the PGA Tour last year, behind McIlroy, Xander Schauffele in Scotland and Rahm in Mexico. He made $1,134,000.

« That’s a tough group of guys to beat, » Kitayama said. « I just have to keep improving. »

KH Lee had a 68 and finished third, with Rahm and Tommy Fleetwood (65) another shot behind.

McIlroy has three wins this year, closing with a 62 in the Canadian Open to outlast Tony Finau and Justin Thomas, a 66 in the Tour Championship to beat Scheffler and a 67 at Congaree with two closing bogeys, just enough to celebrate two big moments.

Another trophy and, finally, another trip to the top of golf.