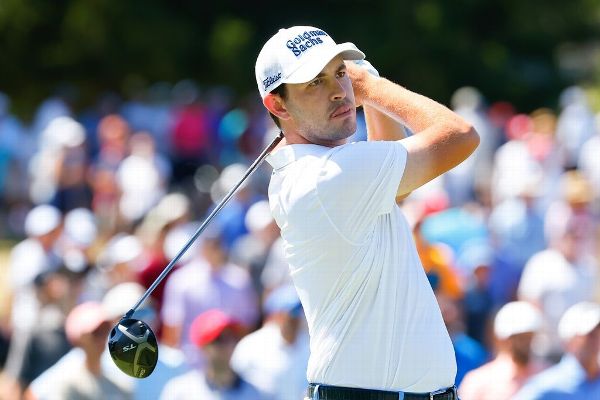 WILMINGTON, Del. — Patrick Cantlay was part of an all-star chasing pack until he holed out from 106 yards for eagle and carried that to a 6-under 65 on Saturday, giving him a 1-shot lead and a chance to become the first back- to-back winner of the BMW Championship in the FedEx Cup era.

Next up is another round with a familiar face. Xander Schauele, his closest friend on the PGA Tour, had a bogey-free 66 and was a shot back, along with Scott Stallings (66).

Cantlay and Schauffele play practice rounds together just about every week when they’re at the same tournament, but never with this much on the line.

More than just the $2.7 million for the winner, Cantlay or Schauffele could go to No. 1 in the FedEx Cup — that also depends on how Masters champion Scottie Scheffler fares — with a win and start the Tour Championship with a 2-shot lead.

Cantlay knows the value of that from experience. After his dynamic playoff win in the BMW Championship last year at Caves Valley, he had the No. 1 seed and a 2-shot lead at the start and wound up winning by 1 shot to claim the $15 million prize.

« My head is not even there right now, » said Cantlay, who was at 12-under 201. « I think the best way to handle this playoff system is to just focus on doing your best in the tournament that you’re in and not worry too much about the points. So that’s what I’m going to do. »

And there’s another reason. This is far from a two-man show on the south course at Wilmington Country Club that is sun-baked and fast on the greens.

Adam Scott, trying to work his way into the top 30 to reach the Tour Championship, held his own with a 69 and was only 2 shots behind. He started the postseason at No. 77 and is coming off a tie for fifth last week just to make it to the BMW.

Also 2 back was Scheffler, the world No. 1 who answered consecutive bogeys late in his round with a 4-foot birdie for a 68.

Collin Morikawa (65) and Aaron Wise (67) made it seven players separated by 3 shots.

Rory McIlroy started slowly and could only manage a 70, leaving him 5 shots off the lead. Jordan Spieth, who began the weekend just 1 shot behind, missed by putts of 3 feet and 2 feet and didn’t have much else go right in his round of 74 that took him out of contention.

Cantlay and Schauffele became fast friends at the Presidents Cup in 2019 at Royal Melbourne and now take holidays together, along with countless practice rounds. It’s different with a scorecard in hand, though the comfort level is obvious.

« I know how he hits the ball, he knows how I hit the ball. If I flush one or he flushes one, it sort of is extra information that we can use. I like to use that as an advantage, and we’re good friends, so it’s a very sort of easygoing pairing even though we’re trying to beat each other, » Schauffele said.

Give this round to Cantlay, just barely.

Schauele was leading when Cantlay missed a 3-foot par putt — he also missed one from a little closer on the 17th — and after they matched two-putt birdies on the 12th, Cantlay holed a birdie putt from 8 feet on the 13th and then spun back a lob wedge for eagle at the 14th.

That put him in the lead, and after the shocker of a short miss for par, he finished with another lob ledge that expertly used a backstop and rolled down to 8 feet for birdie.

Delaware had never hosted a PGA Tour event, so this is new for everyone. That explains why Cantlay, with a wedge in hand, was walking to the front of every green to see the slopes and find the best play. It worked on the 14th for his eagle, and on the 18th for his birdie.

Stallings has plenty at stake Sunday, too. He came into the BMW Championship at No. 46 in the standings and now is clearly within range of playing one more week.

This is his 12th year on the PGA Tour and the closest he has ever been to the Tour Championship.