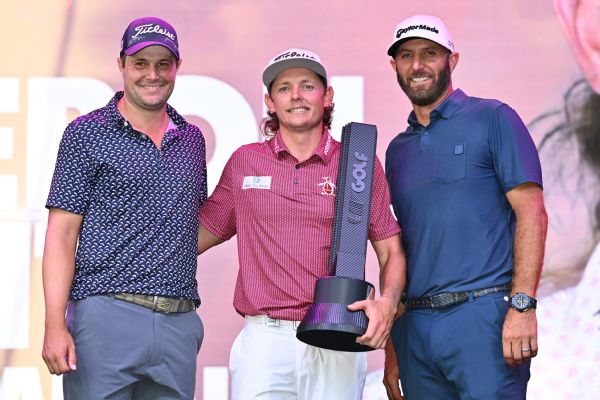 SUGAR GROVE, Ill. — British Open champion Cameron Smith made his decision to leave the PGA Tour for LIV Golf pay off Sunday when he closed with a 3-under 69 for a three-shot victory in the LIV Golf Invitational-Chicago.

Smith was only briefly threatened in the third and final round. One of the key moments was a 10-foot par putt on the 13th hole, and neither Dustin Johnson nor Peter Uihlein could do enough to catch him.

Smith, making his second start with the rival golf league, won $4 million from the $20 million purse for individual play.

« I think I had to prove to myself and other people that I’m still a great player, I’m still out here to win golf tournaments, » Smith said. « I didn’t have my best stuff, but I stuck tough and made some putts. »

Johnson’s birdie enabled his team to win for the fourth straight time, which was worth an additional $750,000 for Johnson, Talor Gooch, Patrick Reed and Pat Perez. In the five events Johnson has played, he now has made just over $12.5 million.

Uihlein’s team — Brooks Koepka is the captain — finished second, which was worth $375.00 for each team member. With the runner-up finish as an individual and team, Uihlein picked up nearly $2.2 million on Sunday.

Smith let his short game do most of the damage. He made enough birdies on the front nine to stay in front, and hit a flop shop to a foot on the par-5 11th for another birdie.

Uihlein made birdie on the 13th and looked as though he might be able to trim the deficit to one shot until Smith made his clutch par.

Smith left no doubt at the end, hitting his approach over the water to 4 feet on the 17th to take a three-shot lead to the par-5 finish, and then holing an 18-foot birdie putt that gave his team a tie for third with Phil Mickelson’s team.

Mickelson had his best round since joining Saudi-funded LIV Golf with a 66 and tied for eighth, his first top-10 finish in five events.

Johnson is the only player from the 48-man field to have finished in the top 10 at every LIV Golf event. He was coming off a playoff victory two weeks ago outside Boston.

Smith was No. 2 in the world when the 29-year-old Australian signed up with LIV Golf after the PGA Tour season ended, the highest-ranked player to join.

Johnson remains one of the most significant players to sign up, a two-time major champion who was No. 1 in the world longer than any player since Tiger Woods.

« He’s probably the one who you look at it feeling he’s going to be at the top of the leaderboard every week, » Smith said. « I hope he thinks the same of me, and hopefully, we can keep it going. »

Sergio Garcia, criticized last week for withdrawing from the BMW PGA Championship after one round and showing up on the sideline of the Alabama-Texas football game, had a 67 and tied for fourth with Joaquin Niemann (68).

The next LIV Golf event is in three weeks in Bangkok.

The series does not return to America until the final team event at Trump Doral near Miami the last weekend in October.