What Malacia brings to Man United after signing from Feyenoord

Manchester United completed the signing of Netherlands left-back Tyrell Malacia on Tuesday from Feyenoord for around €15 million.

Malacia, 22, is the first arrival under new manager Erik ten Hag, but it’s clear he has been scouted and on the radar for some time. How will the defender adapt to the Premier League and what can fans expect from him?

Where has he come from?

A product of the Feyenoord Academy, Malacia spent his days at the respected Varkenoord training complex and signed his first contract in 2015 before being promoted to the first team in 2017. After being integrated into Netherlands’ youth teams at the age of 15, the left -back was quickly recognized as an up-and-coming talent, working his way through every national team age group and performing well at the European Under-21 Championship last summer. He made his debut for the senior Netherlands side in September 2021.

Making 136 first-team appearances for Feyenoord, with four goals and 10 assists, Malacia made his debut in 2017 at the age of 18 against Napoli in the Europa League, where he impressed enough to hold down a semi-regular spot in the XI for the remainder of the season. Following two years as an understudy, he became a regular during the 2020-2021 season.

Though he came to prominence as a left-back — the top teams in the Netherlands rarely entertain from the tried-and-tested « back four » at youth level — Malacia has the characteristics to potentially succeed in a position higher up the pitch too. At Feyenoord, he was favorably used in his favored position, but had the odd cameo as a wing-back or winger too. Above all, he’s an adaptable left-back, often looking to exchange positions and break opponents’ marking patterns by making runs into space in attack.

Over the past decade, elite-level European football has favored ball-playing full-backs who are calm in possession and can participate in the buildup phase — ex-Manchester United left-back Daley Blind being a prime example — but rather than being renowned for his patience in possession, Malacia is in his element when the game opens up with space to exploit going forward. Always eager to push forward — and boasting the speed to recover the ball should he lose it higher up the pitch — the Dutchman features a skill set not only suited to the Premier League, but also to Ten Hag’s brand of football. With the former Ajax coach wanting his defenders to be aggressive, proactive and able to carry the ball forward, it’s not surprising Malacia was an early target.

Despite playing as a left-back, Malacia took 50 shots in the Eredivisie last season, more than any other defender. That rate was only bettered by Man City’s Joao Cancelo (81) and Liverpool’s Trent Alexander-Arnold (51) in the Premier League, which puts him in esteemed company.

Malacia also has fine vision and is able to pick a precise pass from deep. Similarly, although he’s more inclined to look for combinations when arriving in the final third, he has shown himself capable of crossing with different techniques, be it an early pinpoint ball or a smart cut-back pass from the goal line.

Kenneth Perez, an analyst with ESPN in the Netherlands, insists that Malacia’s attitude is a highlight of his game, saying: « With his mobility and positive attitude, he’s so fun to watch. » 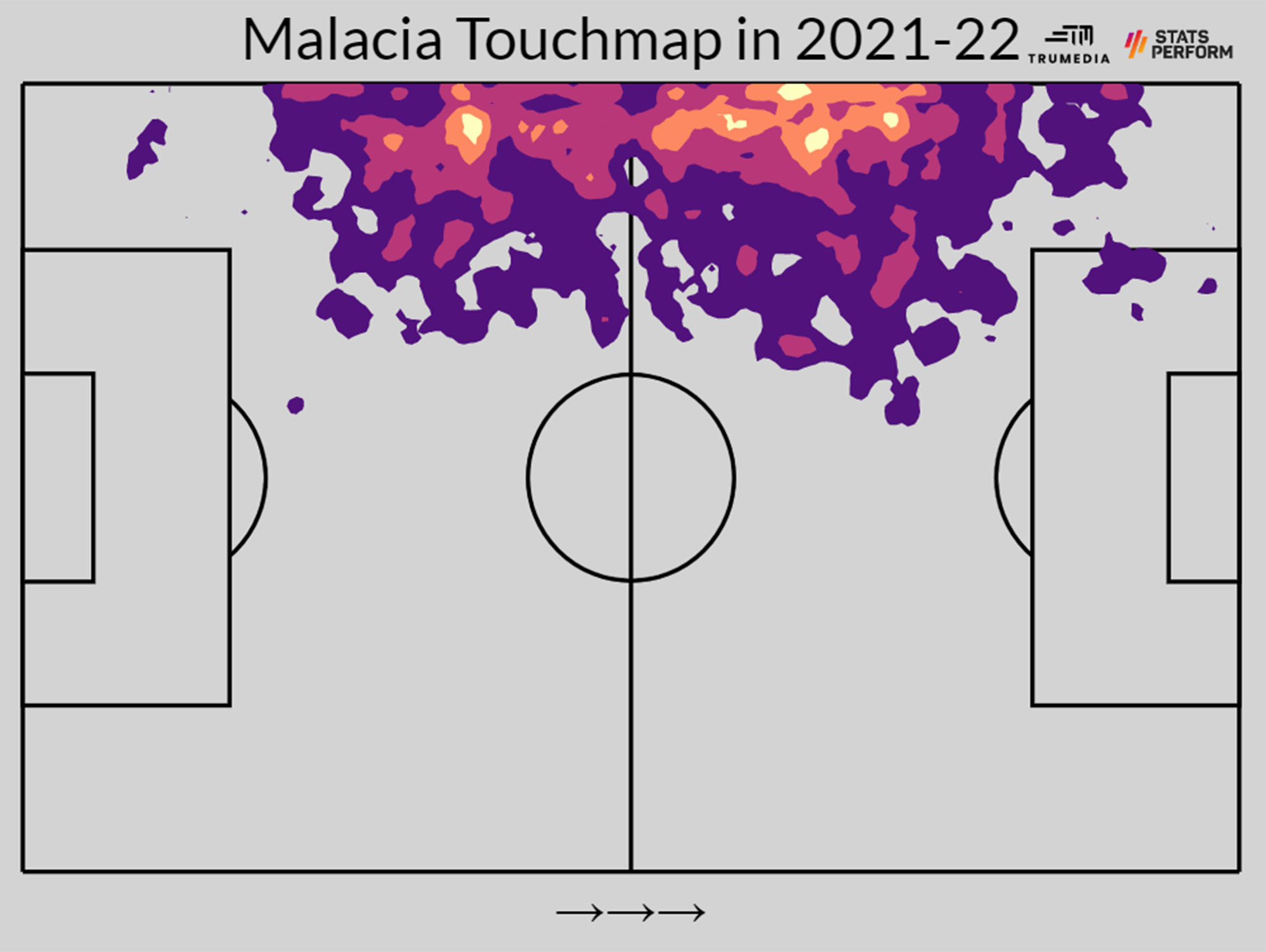 Being an ultra-attacking left-back, something often has to give, but there’s clear evidence the Rotterdam-born defender is becoming a better all-round left-back. « He’s obviously better at attacking than defending, » Perez says. « But I have to say that he’s improved the defensive side of his game a lot — especially over the past year. »

The stats back this up. Last season, Malacia regained possession six times per game, as opposed to 4.5 times during the 2020-2021 campaign. Compared to previous seasons, Malacia also appears better at positioning, keeping possession in dangerous areas and not giving the ball away in the transitional phases. However, his adaptation to the physical nature of the Premier League might become an issue, at least in the early months.

« Almost every player who moves directly from Eredivisie to the Premier League struggles with the physical side of the game, » Perez says. « In the Netherlands, you’re not selected on the basis of your physicality, but rather for your technical and tactical attributes. »

While being one-footed might not be uncommon nor a major deficiency for a modern full-back, Malacia can appear overly relying on his stronger left foot. This is most evident when he’s attempting to wriggle his way out of tight spaces. While quick, effective ball-playing under pressure is one of his key strengths, his lack of trust in his right side can put him in some unnatural positions where he can be easily closed down.

Where he fits in

While every sign points to Malacia being brought in to compete with Luke Shaw and Alex Telles for the left-back slot at Manchester United, he does offer options at left midfield or wing, too. Just don’t expect the new arrival — and first official signing of the Ten Hage era — to become an immediate first-team regular.

« Initially he appears as a fine alternative to Shaw, who is not anywhere as good technically as Malacia but who does have the physical power, especially now that Manchester United should be aiming to control the game more than previously and play in the opponents’ half , » Perez says. « In such a scenario, Malacia will be a great addition with his technical ability, agility and creativity. »