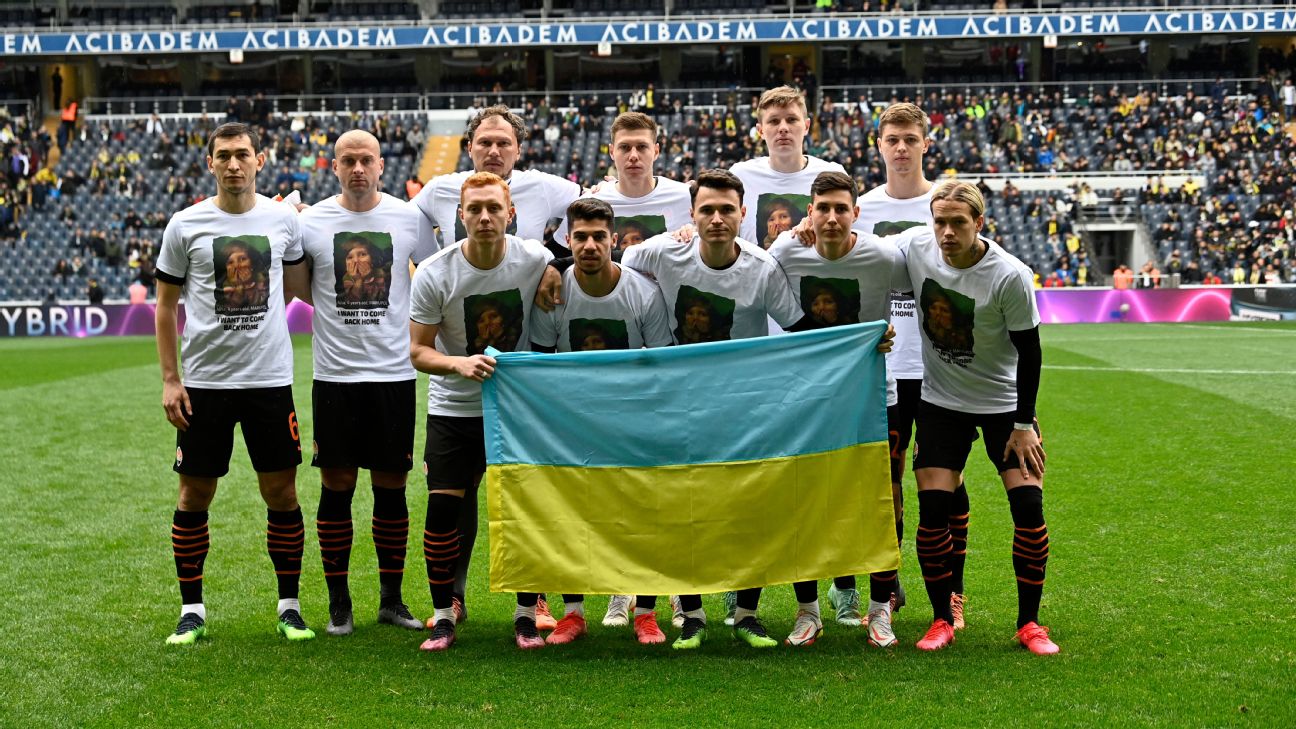 Under threat of Russian attacks in a war that stopped all football in Ukraine in February, a new league season starts Tuesday in Kyiv with the goal of restoring some sense of normal life.

The elegant Olympic Stadium has staged the biggest European football games in the past decade, though none as poignant as the opening-day meeting of Shakhtar Donetsk and Metalist 1925 from Kharkiv — teams from eastern cities that are fighting for their very existence.

– Thompson: Inside Ukraine on the night of their WC playoff

No fans will be allowed in the 65,000-capacity downtown stadium for the 1 pm local time kickoff and the players must be rushed to bomb shelters if air-raid sirens sound.

« We have rules in case of an alarm and we should go to be underground, » Shakhtar captain Taras Stepanenko said Monday in a telephone interview. « But I think the teams, the players will be proud of this event.

« We are ready, we are strong and I think we will show to all the world Ukrainian life and will to win. »

The Ukrainian Premier League returns with the blessing of the nation’s leaders and in a week heavy with meaning.

Tuesday is Ukraine’s national flag day and Wednesday, Aug. 24, is the celebration of independence from control by Moscow that the former Soviet Union republic declared in 1991.

« I spoke with our president, Volodymyr Zelenskyy, about how important football is to distract, » Ukraine federation president Andriy Pavelko said in June about the commitment to restart. « We spoke about how it would be possible that football could help us to think about the future. »

No competitive matches have been played in Ukraine since mid-December when the league paused for a scheduled midwinter break. Games were due to resume on Feb. 25, until the Russian military invasion started one day earlier. The season was canceled soon after the invasion.

The 16-team league restarts without Desna Chernihiv and Mariupol, teams from cities that have suffered brutal destruction.

All games will be played in and around Kyiv and further west and will be shown domestically, abroad and on YouTube in a deal with broadcaster Setanta agreed last week. The total value of $16.2 million over three years is less than some elite English Premier League players will earn this season.

The concept of home-field advantage may have gone for most teams though simply playing on Ukrainian soil — other games Tuesday are in Kyiv, Uzhhorod and Kovalivka — is remarkable.

Ukrainian clubs fulfilling their games in UEFA’s European competitions in recent weeks played in neighboring Poland and Slovakia, or Sweden, to ensure the safety of opponents like Benfica and Fenerbahçe.

Shakhtar, who were top of the domestic standings when last season was formally abandoned, will host opponents at Legia Warsaw’s stadium when the Champions League group stage starts on Sept. 6. The groups are drawn on Thursday.

Just 10 months ago, Stepanenko and Shakhtar faced eventual title winner Real Madrid in a Champions League game at the Olympic Stadium — the same field where the storied Spanish team won the final in 2018.

Last season, Shakhtar could field the core of Brazilian players they became famous for, funded by billionaire businessman Rinat Akhmetov, who also owns the Azovstal steelworks in Mariupol.

Those star players have now left Ukraine and Shakhtar will rely more on young, homegrown talent, just like their traditional rival Dynamo Kyiv, who start Sunday against Dnipro-1.

« Of course, it’s a new team, » Stepanenko acknowledged. « We feel confident because we play for our country and for our people. »