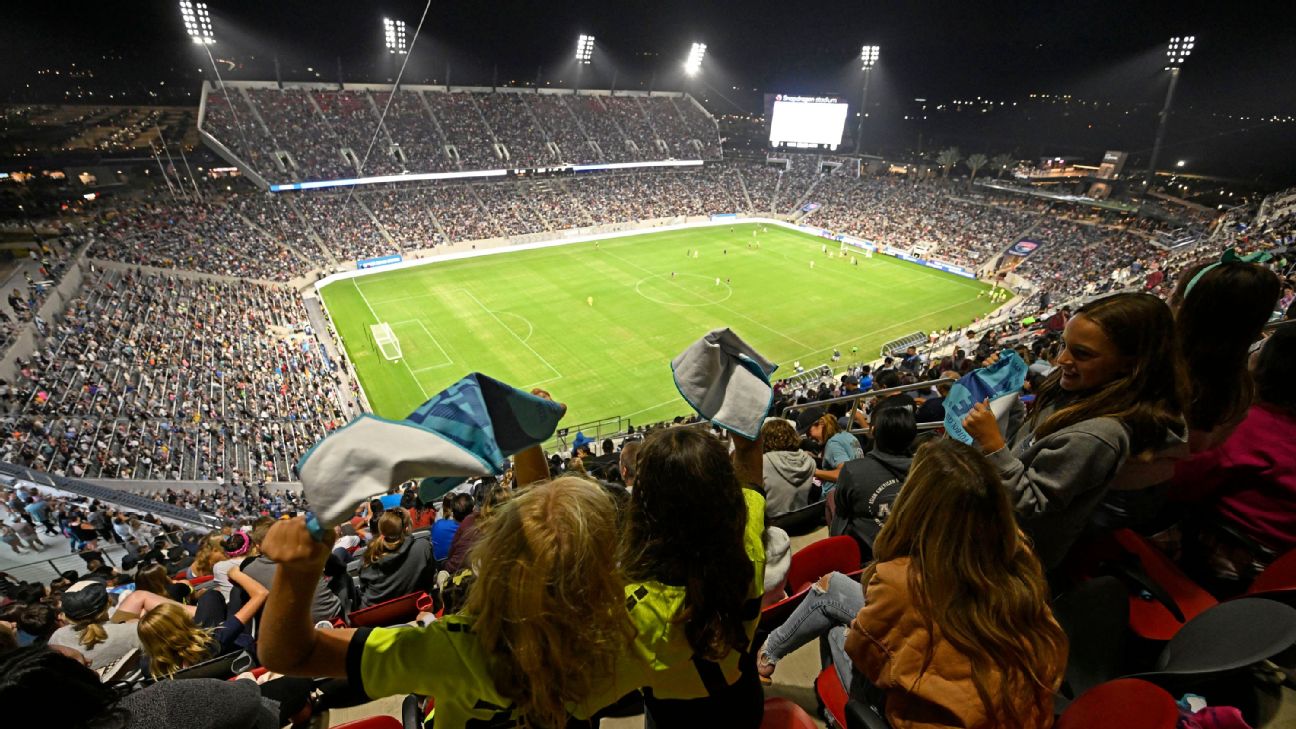 The San Diego Wave has smashed the single-game attendance record for the National Women’s Soccer League (NWSL) after a sellout crowd of 32,000 was recorded for Saturday’s 1-0 win over southern California rivals Angel City FC.

The game was the Wave’s first to be held at the new Snapdragon Stadium on the Mission Valley campus of San Diego State University.

– Hernandez: Not even Bad Bunny can spoil the Wave’s party
– Stream on ESPN+: LaLiga, Bundesliga, MLS, more (US)

The previous record for a standalone game was 25,218, set back in 2019 in a match at Providence Park between the Portland Thorns and the North Carolina Courage.

« This is a great reflection of the momentum we see in women’s sports, » San Diego Wave FC president Jill Ellis said when the club announced a sellout earlier this month. « We’ve sold all of our inventory, it’s incredible. We should celebrate this but we should now expect it, big crowds for women’s professional sports. »

Snapdragon Stadium opened last month after two years of construction. The Wave will share space at the new venue with the university’s football team, along with Major League Rugby’s San Diego Legion in 2023.

this ain’t a dream.

this is san diego. pic.twitter.com/RRNUvldtU6

The Wave, which is in their first season in the NWSL, previously played at the 6,000-capacity Torero Stadium at the University of San Diego.

Underhead coach Casey Stoney. the expansion team has been enjoying an impressive first season in the NWSL and went into Saturday’s game in third place in the league standings. The top six teams in the 12-team competition will qualify for the playoffs, which are set to begin next month.

The Wave has been spearheaded by United States women’s national team great Alex Morgan, who has scored a league-leading 15 goals so far this season.

« I think it’s a testament to women’s soccer in the US and the NWSL, and the San Diego Wave and what we’re building here, » Morgan told ESPN last month when it was first revealed that the Wave had sold enough tickets to break the single-game attendance record.

« To see this number today, right now, and just knowing that we’re gonna get a sellout, it’s just an incredible feeling because this club set its mind on breaking the single-match attendance in league history. They’ve done that now , but now the goals don’t stop for this club and I’m just really proud to be a part of that. »