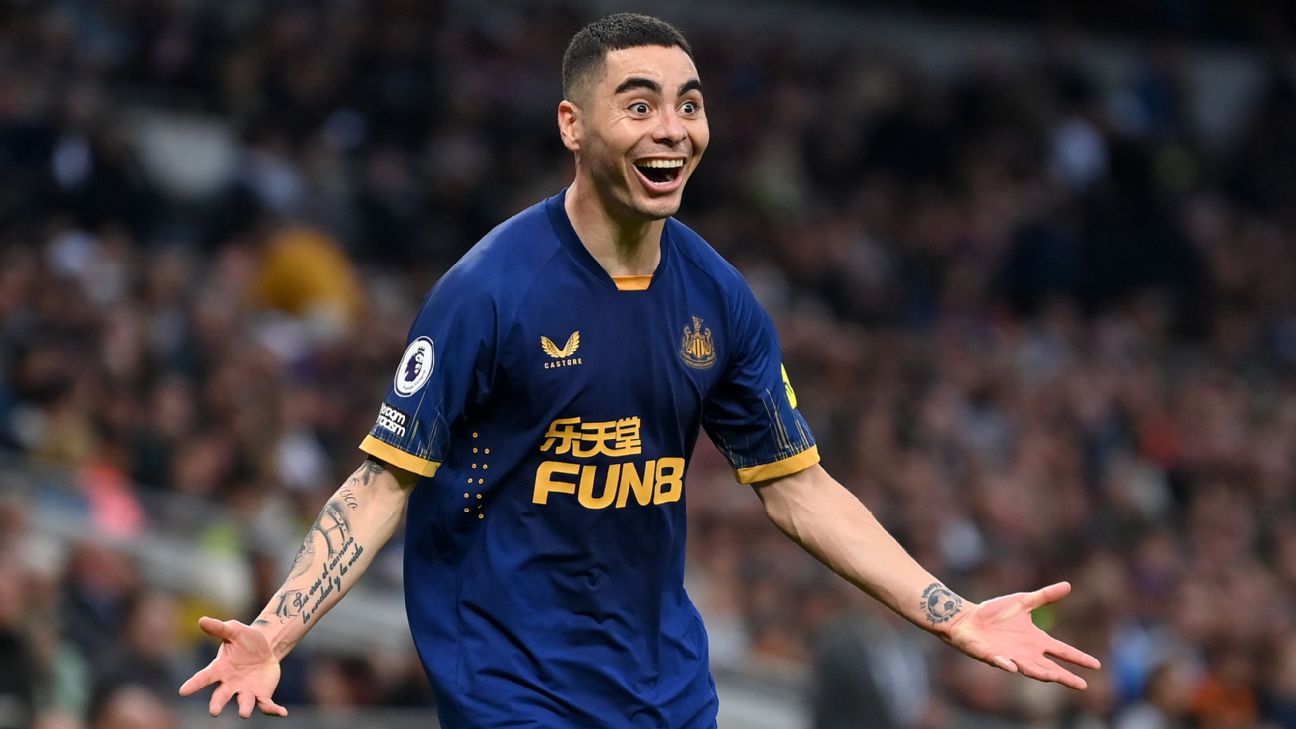 Newcastle United’s excellent run of form continued this weekend with a 2-1 win at Tottenham Hotspur that saw Eddie Howe’s side stretch their Premier League unbeaten streak to seven games and go climbing into the top four.

The decisive goal came via Miguel Almiron, who scored his fifth goal in his last five outings — the same number of goals as he scored in his first 61 Premier League appearance.

Call it coincidence, but many have noticed that the Paraguay international’s dramatic improvement has come ever since Manchester City star Jack Grealish hit him with an unprovoked verbal broadside five months ago.

The comment was caught on camera amid City’s title parade back in May, when Grealish roasted teammate Riyad Mahrez by comparing him to Almiron in a decidedly uncomplimentary tone.

City had just clinched the Premier League title by a single point after staging a dramatic comeback to win 3-2 against Aston Villa on the final day of the season. As Grealish played a starring role in the lively celebrations, he was asked by Bernardo Silva what he thought the turning point had been against Villa to which the winger croakily suggested the decision to sub Mahrez off after 56 minutes as — in his words — the Algerian had been « playing like Almiron. »

Give these two their own show already 😂 pic.twitter.com/Z6wDYLhKXo

Since that fateful moment in Manchester city centre, the form of the two players has contrasted wildly, with Almiron hitting his stride for Newcastle during the opening months of the 2022-23 campaign while Grealish has struggled to find a footing of any sort.

It certainly looks like Almiron took the derision personally. Since the start of this season, the former Atlanta United forward has weighed in with six Premier League goals in 12 games, ever since he opened his account for the campaign in the thrilling 3-3 draw with *checks notes* Manchester City on Aug. 21.

Grealish, on the other hand has registered just once — in the first minute of City’s 3-0 victory over Wolves on Sept. 17 — in six league appearances so far this term, and is yet to provide a single assist either.

It’s perhaps little wonder that Grealish has failed to make any waves given that he’s produced just five shots (with two on target) in the Premier League this season. By comparison, Almiron has had 31 shots (10 on target). Perhaps the England international can at least take some solace in the fact that both players have more or less the same 20% conversion rate?

Indeed, Almiron has now scored more Premier League goals this month (five in five games) than Grealish has mustered for City in total (four in 32 games) since the latter’s record-breaking £100 million transfer from Aston Villa in the summer of 2021 .

Just to further drive home the point, Grealish has been included in the starting lineup for just four of City’s 11 league games this season, completing the full 90 minutes just once without being hauled off by Pep Guardiola.

The delicious irony hasn’t gone unnoticed on social media either with fans lining up to mock Grealish for his inability to back up his scurrilous jibes.

Miguel Almiron elevating his game after Grealish’s insult is the kind of thing I like to see.

Jack Grealish should talk about more players. What he’s done to Miguel Almiron is insane.

Jack Grealish: « Take him off the pitch as soon as possible. He played like Almiron. »

Almiron’s form has him right in the running for October’s Premier League Player of the Month award and, should he win, it has even been suggested that he should be Grealish who hands it over in person.

Petition to get Jack Grealish to hand Miguel Almiron the Premier League Player of the Month award? 👀#NUFC pic.twitter.com/1Zgt5iKPYl

Honestly, we’d love to see it.