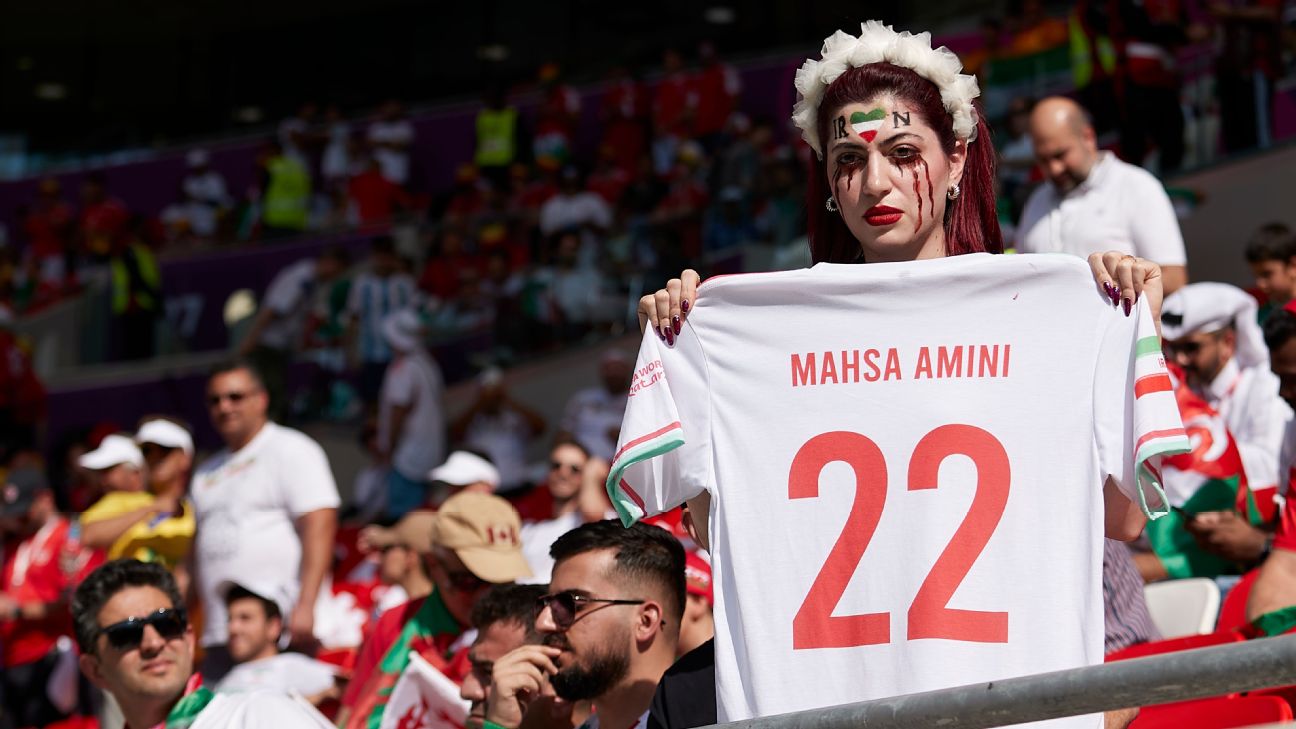 Tensions ran high at Iran’s 2-0 win over Wales at the World Cup on Friday as fans supporting the Iranian government harassed those protesting against it and stadium security seized flags, T-shirts and other items expressing support for the protest movement that has gripped the Islamic Republic.

Some fans were prevented by stadium security from bringing in Persian pre-revolutionary flags to the match against Wales at the Ahmad Bin Ali Stadium.

Others carrying such flags had them ripped from their hands by pro-government Iran fans, who also shouted insults at fans wearing T-shirts with the slogan of the protest movement gripping the country: « Woman, Life, Freedom. »

Unlike in their first match against England, the Iran players sang along to their national anthem before the match as some fans in the stadium wept, whistled and booed.

The national team has come under close scrutiny for any statements or gestures about the nationwide protests that have wracked Iran for weeks.

The squad has been criticized in Iran for representing the government, while pro-regime supporters condemned the players for refusing to sing the national anthem before the 6-2 defeat against England.

And Cheshmi, who plays in Iran for Esteghlal, said he and his teammates have overcome great pressure to perform in Qatar.

« In the first game, there was great pressure on the group and team, which is why we couldn’t get the result we needed against England, » Cheshmi said. « This time we were ready and able to win. This is because of the solidarity among the team members that we could achieve this result.

« I should say that if the pressures are football-related, it is acceptable, you have good and bad days, but if pressure is on us unfairly, that would not be right.

« Certain things happened that were not quite fair, we received non-football pressures, and the entire family of the team helped each other. I scored, but the team did the work. »

Before the game, shouting matches erupted in lines outside the stadium between fans screaming « Women, Life, Freedom » and others shouting back « The Islamic Republic! »

Small mobs of men surrounded three different women giving interviews about the protests to foreign media outside the stadium, disrupting broadcasts as they angrily chanted, « The Islamic Republic of Iran! »

Many women fans appeared shaken as Iranian government supporters shouted at them in Farsi and filmed them close-up on their phones.

Inside the stadium, a woman with dark red tears painted from her eyes held aloft a football jersey with « Mahsa Amini – 22 » printed on the back — a reference to the 22-year-old Iranian Kurdish woman whose death in police custody two months ago ignited the nationwide protests in Iran, a Reuters photo showed.

One 35-year-old woman named Maryam, who like other Iran fans declined to give her last name for fear of government reprisals, started to cry as shouting men blowing horns encircled her and filmed her face.

She had the words « Woman Life Freedom » painted on her face.

Maryam and her friends had worn hats emblazoned with the name of an outspoken Iranian former football player Voria Ghafouri, who had criticized Iranian authorities and was arrested in Iran on Thursday on accusations of spreading propaganda against the government.

She said Iranian government supporters had taken the hats from their heads.

« We want to raise awareness about his arrest and about the women’s rights movement. Simple, » said Maryam, who lives in London but is originally from Tehran. « I’m not here to fight with anyone, but people have been attacking me and calling me a terrorist. All I’m here to say is that football doesn’t matter if people are getting killed in the streets. »

Ghafouri, who is Kurdish, was a star member of Iran’s 2018 World Cup team, but was surprisingly not named in the squad for this year in Qatar.

« It’s obvious that the match had become very politicized this week. You can see people from the same country who hate each other, » said Mustafa, a 40-year-old Iran fan who also declined to give his surname.

« I think the arrest of Voria has also affected society in Iran a lot. »

Furious protesters in Iran have been venting their anger over social and political repression and the state-mandated headscarf, or hijab, for women.

The demonstrations, spurred by Amini’s Sept. 16 death in the custody of the country’s morality police, have quickly grown into calls for the downfall of the Islamic Republic itself.

At least 419 people have been killed since the protests erupted, according to monitoring group Human Rights Activists in Iran.

The turmoil has overshadowed the start of Iran’s World Cup campaign.

The opening match against England on Monday was the scene of protests as anti-government fans waved signs and chanted in the stands.

Before that 6-2 loss, Iran’s players remained silent as their national anthem played, and they didn’t celebrate their two goals.

On Friday, they sang along to the anthem and celebrated wildly when they scored in the 2-0 win against Wales.

Ayeh Shams from the United States, who was at the game against Wales with her brother, said security guards confiscated her flag because it had the word « women » on it.

« We’re first-generation American. Our parents were born in Iran. We’re just here to enjoy the games and give a platform for the Iranian people who are fighting against the Islamic regime, » Shams said.

Zeinlabda Arwa, a security guard at the stadium, confirmed that authorities had been given orders to confiscate anything but the flag of the Islamic Republic of Iran.

« Whether you’re talking about Iran or Qatar or any country, you are only allowed to bring in the normal flag, » she said.

An angry group of Iranian government supporters shouted at Elyas Doerr, a 16-year-old Iranian living in Arizona who was wearing the Persian flag as a cape, until he took it off and put it in his bag.

« They’re not liking that it’s a political statement, » he said, adding that other Iranian fans had approached him to say they appreciated the gesture.

Scattered protests also erupted in Kurdish towns in the country’s west and across the central city of Isfahan on Thursday.

Iranian state TV on Friday devoted its main news bulletin to Iranians’ football progress, wishing the national team luck against Wales and airing a montage of Iranian goals throughout history.

Information from ESPN FC’s Mark Ogden and Reuters was used in this report.