How much success have they had around the world? 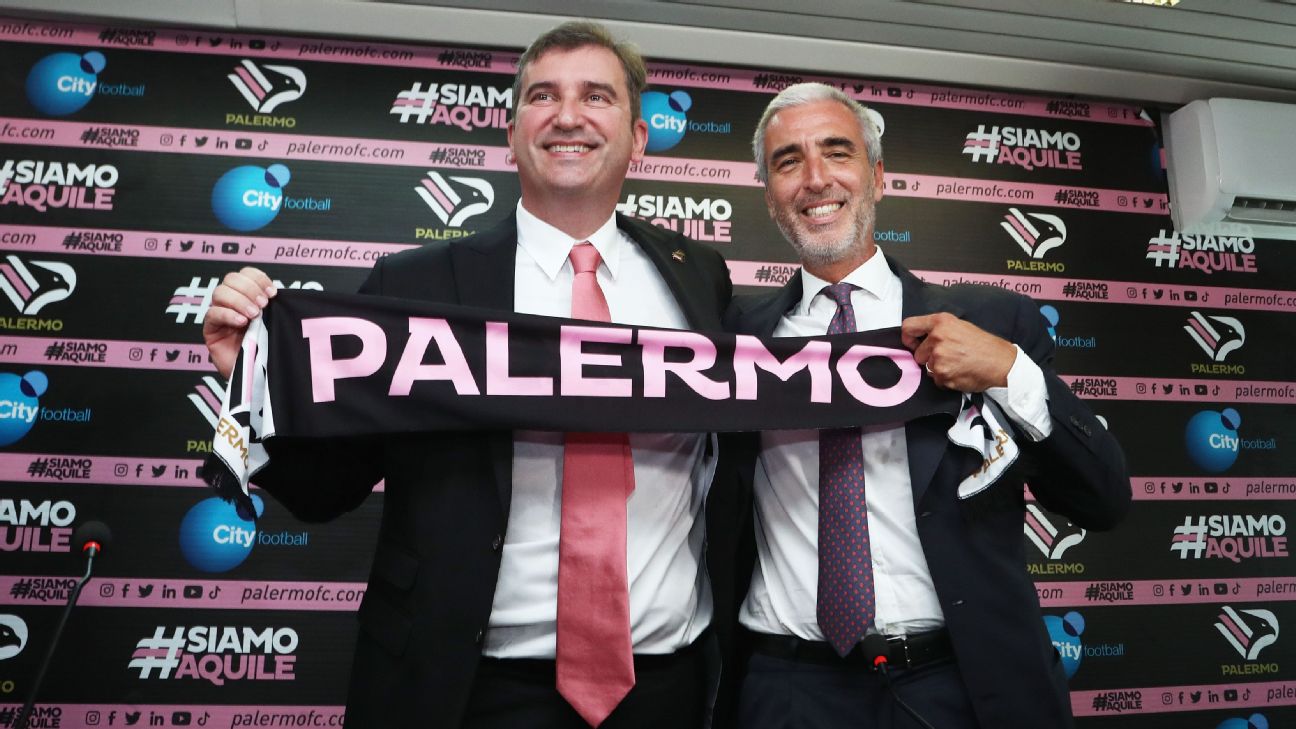 City Football Group (CFG), owner of reigning Premier League champions Manchester City, has increased the size of its stable of clubs to 11 this week with Italian side Palermo the latest addition to the Abu Dhabi investment company’s ever-expanding portfolio.

CFG counts the reigning Premier League champions as its flagship club but also owns majority stakes in 10 other teams around the world including Girona in Spain, New York City FC in the United States and Melbourne City in Australia.

Welcome to the family, @Palermofficial! 💙

Palermo announced earlier this week that CFG have purchased a controlling stake in the Serie B outfit in a deal that will see former owner Dario Mirri retain a 20% interest in the club and continue in his role as president.

Having been Serie A regulars for much of the 21st century — and providing a first European destination for South American stars Edinson Cavani, Javier Pastore and Paulo Dybala — Palermo went bankrupt in 2019 and had to begin life again as a phoenix club (known officially as Palermo FC) down in Serie D, the fourth tier of the Italian football. They have since fought their way back up into the second tier after earning two promotions in four seasons, most recently via last season’s Serie C playoffs.

Palermo will be hoping that further progress and success awaits them under CFG’s stewardship. Given the group’s track record, the signs are certainly promising. Here’s a look at how each of the clubs under the CFG banner have fared since being taken over by the company.

– Transfer Grades: Man City receive A for Phillips signing
– Stream ESPN FC Daily on ESPN+ (US only)
– Don’t have ESPN? Get instant access


As the jewel in CFG’s crown, City have undergone a total overhaul since Sheikh Mansour and the Abu Dhabi United Group finalized their takeover of the club in 2008, with City winning their first Premier League title in 2011-12. In an official sense, CFG only took the reins upon the group’s formation ahead of the 2013-14 season, winning the league title in its first year of existence.

With Pep Guardiola at the helm, City have won a further four league titles (2017-18, 2018-19, 2020-21 and 2021-22) as well as seven domestic cups. However, the principal ambition of winning the Champions League continues to evade City and CFG though they came close in 2020-21 after reaching the final for the first time only to be narrowly beaten by rivals Chelsea.


Despite being founded in the late 1980s, City’s women’s team only officially became part of the club when the Abu Dhabi Group made the decision to bring them under the same roof in 2012.


Melbourne City became the second club to join CFG when the takeover deal was formally completed in 2014. The club were known as Melbourne Heart and played in red-and-white stripes at the time but soon changed their club moniker and colors (to sky blue ) for the purposes of « City » brand synergy.

Since then, the Australian side have become a dominant force on the domestic front and procured their first silverware in 2016 with the Australia Cup. League success soon followed with titles won in both the regular A-League season and the Grand Final including the Championship (2021), back to back Premierships (2020-21, 2021-22) and the Club Championship (2021-22) which is a trophy awarded to winners after points collected by both the men’s and women’s teams of A-League clubs are combined.

Indeed, Melbourne City Women have been just as successful since CFG took over with their superior infrastructure and facilities helping them quickly become an established force in the A-League Women, winning the Premiership in 2015-16 and 2019-20 and the Championship on no less than four occasions (2016, 2017, 2018 and 2020).


Mumbai City were founded in August 2014 and entered the inaugural season of the Indian Super League (ISL) though initially they struggled to compete, finishing seventh in an eight-team league in their maiden campaign. With CFG providing support, City’s fortunes improved year on year to the point that they were finally crowned ISL champions in 2020-21 after securing both the league winner’s shield and the league title by beating rivals ATK Mohun Bagan in the final.

Mumbai City were unable to maintain that success in 2021-22 and finished fifth in the regular season table, therefore missing out on a place in the playoffs. The ISL Premiership title was claimed by Jamshedpur, though it was Hyderabad who emerged as champions after beating Kerala Blasters on penalties in the 2022 final.


New York City FC originally began life as a venture partnership between Manchester City and the New York Yankees baseball team. They were then granted expansion franchise status in May 2013 and started competing in Major League Soccer two years later. Due to their close ties with City, the New Yorkers were able to swap players and coaches and even entice some big names including David Villa, Frank Lampard and Andrea Pirlo.

However, for all their star power, success was not immediately forthcoming and it took seven seasons for New York City FC to land their first major trophy with the 2021 MLS Cup, which then-coach Ronny Delia’s side clinched by beating hosts Portland Timbers on penalties in the championship final.


Girona have been in existence since the 1930s, but did not earn their first-ever promotion into LaLiga until the summer of 2017. A few weeks later, CFG purchased a majority stake in the Catalan club. Initially the ownership of the club was split between CFG and a consortium led by Pere Guardiola, football agent and brother of Manchester City manager Pep Guardiola.

Tea Blanquivermells were relegated after two seasons in the top flight, but they will return for the 2022-23 season after securing promotion via the playoffs, beating Tenerife 3-1 over two legs in the final.


CFG originally purchased a stake in Yokohama F. Marinos in 2014 as part of a partnership deal with Japanese car manufacturing giant Nissan, who founded the club as a works team back in the early 1970s.

Since the City group came on board, Marinos have been crowned J1 League champions (2019) for the fourth time in their history and the first time in almost 15 years. It was also their first silverware of any kind since winning the Emperor’s Cup in 2013.

Marinos finished runners-up behind Kawasaki Frontale in the 2021 J1 League standings but are leading the way this season (2022), sitting three points clear at the top of the table with 19 games played after scoring nine goals in their last two games.


CFG purchased Club Atletico Torque in April of 2017 and wasted no time in adding their City branding into the mix. Torque made their Uruguayan Primera Division debut shortly thereafter, having already sealed their promotion for the 2017-18 season. However, life in the top flight lasted just one year as the club dropped back down to the second tier. Torque then won the Segunda Division title in 2018-19 and returned to the Primera, finishing third in both the Apertura and Clausura stages of the 2020 campaign before finishing fourth in 2021.

As things stand, Torque are still chasing their first top-class honors under CFG ownership though they have made a promising start to the 2022 league season by winning two of their first three games in Group A.

CFG purchased a stake in Chinese third-tier side Sichuan Jiuniu in February 2019, just over two years after the club was first founded. They were then promoted to China League One (the second tier) ahead of the 2020 season as the result of a mass reclassification of teams by the Chinese Football Association. After finishing eighth in the 2021 campaign, Sichuan Jiuniu are currently top of the China League One table after seven games of the 2022 season.

Lommel SK began their association with CFG when the latter became majority shareholders of the Belgian side in May 2020. The club were and still are competing in the First Division B (second tier) having finished a respectable third in their maiden league campaign as part of the family — a vast improvement on their last-place finish in 2019-20.

However, Lommel have fallen some way short of the instant success enjoyed by some of their fellow CFG stablemates, finishing in sixth place (in an eight-team division) in 2021-22, narrowly avoiding relegation by a handful of points. They have since hired former Arsenal defender and coach Steve Bould as manager in a bid to turn their fortunes around.

The 10th club to be added to the portfolio, French outfit Troyes became a CFG club when the group purchased the shares belonging to former owner Daniel Masoni in September 2020. Troyes spent the 2020-21 season in the second tier but are now playing top- flight football alongside the likes of Paris Saint-Germain and Lyon after getting promoted as Ligue 2 champions.

Previously, Troyes had bounced up and down between the top two division of French football, reaching Ligue 1 four times since 2003 but only managing to avoid being relegated straight back to Ligue 2 on one occasion. In that context, their first season back in Ligue 1 under CFG ownership was a relative success thanks to a 15th place finish that saw the club stave off the drop by a comfortable margin.