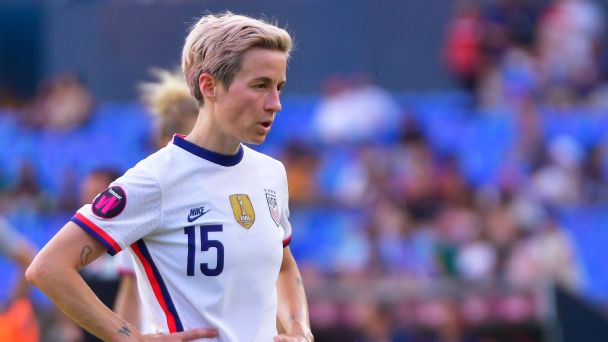 Alex Morgan, Lindsey Horan and Megan Rapinoe headline the 23-player roster named by United States manager Vlatko Andonovski on Monday for a pair of friendlies against Nigeria in September.

The first match will take place Sept. 3 at Children’s Mercy Park in Kansas City, Kansas, while the second will be held three days later at Audi Field in Washington.

– After Euro 2022, which teams look ready to topple USWNT?
– Stream ESPN FC Daily on ESPN+ (US only)
– Don’t have ESPN? Get instant access

All 23 players were part of the squad that won the 2022 CONCACAF W Championship last month, which clinched berths at both the 2023 FIFA Women’s World Cup and the 2024 Olympic Games in Paris. The only player who was on that roster but is absent from the squad is injured Washington Spirit defender Emily Sonnett.

Defender Crystal Dunn, who gave birth to her son Marcel on May 20, will join camp for training as she continues her return to fitness but will not feature in the matches. Horan, who plays in France for Lyon, is the only non-domestic player on the roster, with eight of the 12 teams in the NWSL represented.

« All the players on the roster performed well in Mexico at qualifying and have carried that form for their clubs, so we’ll continue the process of growing as a team with this group in what will be two challenging games against Nigeria, » Andonovski said .

« Preparing for the World Cup is a long process, and I’ve been very happy with how our team understands that process, is willing to do the work and is making positive strides every camp to get us to where we want to be next summer . »

The upcoming games will be the first domestic matches for the team since qualifying for the 2023 World Cup, which will kick off in less than a year in Australia and New Zealand. Nigeria also qualified for the tournament — its ninth successful qualification campaign in a row — earning its berth earlier this summer at the 2022 Women’s Africa Cup of Nations. The Super Falcons are 11-time African champions

The match in Kansas City also brings the USWNT back to Andonovski’s home area for the second time since he became head coach at the end of 2019, having most recently faced Korea Republic at Children’s Mercy Park in October 2021. Kansas City, Missouri, was recently named as one of 11 US host cities for the 2026 FIFA World Cup.

The WSL has a referee problem. Is VAR the solution?